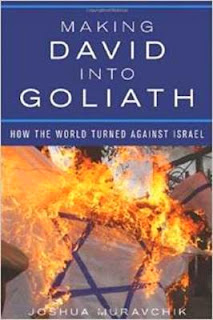 Making David into Goliath: How the World Turned Against Israel by Joshua Muravchik is a wonderful overview of the history of how Israel went from being the darling of the left in 1967 to becoming the victim of the UN's infamous "Zionism is Racism" resolution in 1975.

Muravchik expertly identifies, and dissects, the factors that turned the Left against Israel in such a short time.

Muravchik identifies a number of key factors that caused this stunning public relations victory for the anti-Israel crowd. The first is Yasir Arafat, who brilliantly modeled the PLO after the anti-colonialist movement of Algeria and then cultivated, and took advantage, of relations with communist China and the Soviet Union, which crucially provided the PLO with extensive propaganda support that started bleeding into Western leftist journalist writings. Suddenly, the Arab cause turned from one explicitly geared towards destroying Israel into a "Palestinian" struggle against colonialism and imperialism. These "progressive" codewords were eagerly taken up by Western socialists and leftists, especially in Europe.

The second factor in giving the PLO legitimacy was, ironically, terrorism. Muravchik enumerates every airline hijacking and airport attack in the late 1960s and early 1970s, exposing how easily European leaders caved to the hijackers' demands, in the hope that they would be left alone next time.

The twin to that strategy was the Arab oil embargo that started in 1973. The EEC (precursor to the EU) responded with a pro-Arab position  on the Middle East: calling on unconditional full Israeli withdrawal from lands gained in 1967 without negotiations or border adjustments envisioned in UNSC 242 and did not call on Arabs to make peace with Israel.

Psychologically, one does not want to think of oneself as a craven hypocrite who knuckles under to threats. So the only way to not fall into self-loathing is to find "human rights" justifications for cowardice.

Muravchik also details how the Non-Aligned Movement took over the UN, and brought the Palestinian issue as the single biggest agenda item in that body. He also highlights how Jewish born antisemite Bruno Kreisky, chancellor of Austria and vice president of the Socialist International, singlehandedly turned that body from pro-Israel to anti-Israel.

Finally, Muravchik details how the academic Left fell under the spell of a fraud: Edward Said. Said managed with his one work, Orientalism, to seduce generations of students into the romantic ideal of the East as being ruthlessly exploited and subjugated by the West. Said later admitted was really meant specifically to help Palestinian nationalism.

The remaining favor that the Left held towards Israel disappeared when it elected its first non-Labor government, led by Menachem Begin, a figure that most on the Left disliked viscerally. Even after the peace agreement with Egypt they didn't warm up to him, and the Lebanon war solidified the direction that they were already going in.

The book then goes on to describe how Israeli post-Zionism started to affect both Israeli and international views of the Jewish state. He goes into detail on how B'Tselem was founded and how it tried to be both a human rights organization and an political advocacy group - which is contradictory. Muravchik describes the importance of Israel's "New Historians" on Israel's self-image as well as how the world looked at the state. And he shows how Ha'aretz is complicit in demonizing Israel from the inside.

The author then masterfully takes apart the hypocrisy of the new Left's organizations that have taken on their anti-Israel cause. He dismantles the ISM, exposes HRW's insane anti-Israel stance (pointing out how their MENA head Sarah Leah Whitson went out of her way to praise Moammar Qaddafi,) and destroys Walt and Mearsheimer and their ideological cousins from Richard Falk to J-Street.

The remarkable penultimate chapter lays out the best liberal pro-Israel arguments against its critics, going from the outbreak of the second Intifada through the building of the separation barrier (and the bias of the ICJ,) the Lebanon war, Operation Cast Lead, Goldstone and beyond. The very arguments raging today against Israel in Gaza are all discussed and masterfully defeated.

Making David into Goliath is one of the best liberal defenses of Israel ever written.