Shlomit Krigman, a 23-year old woman from Shadmot Mehola in the West Bank died and was laid to rest in Har Hamenuchot in Jerusalem; 2 terrorists attacked 2 women outside settlement's grocery store; another woman was moderately wounded; security guard shot and killed them.

Shlomit Krigman, a 23-year old woman from Shadmot Mehola in the West Bank, stabbed in a terror attack in Beit Horon Monday, died of her wounds Tuesday morning and was laid to rest in Har Hamenuchot in Jerusalem.

Hadassa Medical Center said that "despite the efforts of medical staff and efforts to stabilize her condition, we were forced announce her death this morning." There has been considerable improvement in the condition of the other woman wounded in the attack. She is 58 and is hospitalized in Shaare Tzedek Medical Center in Jerusalem. Shlomit is survived by her parents, Naama and Yitzhak, and six siblings. Recently she completed a bachelor's degree in industrial design at the University of Ariel.

Hundreds attended her funeral at Har Hamenuchot in Jerusalem. Her teacher at Ariel University eulogized her and said that "she was open to the world and she was full of curiosity. She was interested in many fields. It all came to an end in an instant. A young woman whose life was cut short."

The attack happened on Monday afternoon, when two terrorists stabbed two women and planted home-made bombs outside a grocery store at the settlement of Beit Horon. A security guard shot and killed both of the attackers.

Security forces found three home-made bombs in the vicinity of the store, apparently planted there by the terrorists, and a bomb squad was called to the scene to neutralize them. 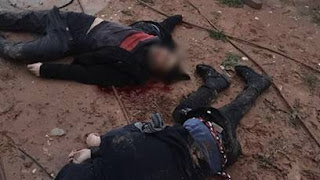 The terrorists - Ibrahim Alan, 22, from Beit Ur al-Tahta near Highway 443, and Hussein Abu Ghosh, 17, from the Qalandiya refugee camp, who is affiliated with Hamas - came into the settlement from the nearby wadi, jumping over the settlement's fence.

According to Motti Shalem, who worked at the grocery store at the time of the attack, "the two terrorists came from the direction of the fence, and must've breached it and got in. Then they stabbed a woman on the sidewalk, and another at the parking lot, and then tried to enter the store. Me and another guy pushed them back with a supermarket cart, and then they ran, and were shot by the security guard."

Following the attack, Beit Horon's residents were ordered to stay inside their homes and close their doors and windows. The IDF has set up roadblocks in all access ways to Beit Ur al-Tahta, the home of one of the terrorists, only allowing people in and out after a security check.

President Reuven Rivlin issued a statement following the attack, saying: "My thoughts and prayers are with those wounded and fighting for their lives after the severe terror attack at Beit Horon. These difficult times are fraught with confrontation and we will overcome. We will continue to fight against terrorism and the incitement which drives it. In the face of terror, we choose life."

Explosive device apparently detonated when man attempted to use it against Border Police forces in Abu Dis; troops unharmed

A Palestinian man was killed while attempting to attack Israeli Border Police in the East Jerusalem neighborhood of Abu Dis on Saturday night, when the bomb he was carrying apparently exploded prematurely.

Initial reports indicated that there were no casualties among the Israeli forces.

Earlier Saturday a Border Police officer shot dead a Palestinian teenager who tried to stab him as he guarded the entrance to a West Bank settlement.

Roqaya Abu-Eid, 13, approached the entrance to Anatot, near Jerusalem, brandishing a knife, and attempted to stab the policeman as he went to speak to her. There were no Israeli injuries in the incident.

Israel Police said later that an initial investigation showed the girl, from the nearby village of Anata, had fought with her parents and stormed out the family home with the knife, declaring that she wanted to die.

At least 29 Israelis and some 150 Palestinians, most of them attackers, have been killed in the latest spate of terrorism and violence in recent months, which has included Palestinian stabbing, car-ramming and shooting attacks in Israel and the West Bank.

The head of the Palestinian domestic intelligence body said this week that the Palestinian Authority has prevented 200 attacks against Israelis in the current wave of violence, which began in October.