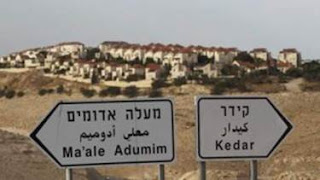 Since 1967, Israel has occupied the West Bank (including East-Jerusalem), the Gaza Strip and the Golan Heights. These territories are beyond the Green Line, which is the internationally recognized border of the State of Israel. Israel has established settlements in these occupied territories, which is illegal according to international law, for instance the Fourth Geneva Convention, the Hague Convention and many UN Security Council resolutions.

Israel’s settlements in the Gaza Strip were only dismantled in August 2005. On the West Bank and the Golan Heights, however, settlements are expanding and new ones are being established. These settlements are a source of severe and systematic human rights violations, harming the daily lives of millions of Palestinians and a few thousand Syrians living under Israeli occupation. Moreover, these settlements pose a serious obstacle to peace between Israel and the Palestinians

After the 1948-49 Arab-Israeli war, Israel and its neighbouring countries established a postwar armistice line that marked Israel’s borders with Egypt, Jordan, Lebanon, and Syria. It is known as the Green Line, the internationally recognized border of the State of Israel. Beyond this border lie the West Bank (including East Jerusalem), the Gaza Strip, and the Golan Heights, the remaining territories of historic Palestine. These territories have been occupied by Israel since 1967. The West Bank and Gaza Strip are known as the occupied Palestinian territories (oPt), the Golan Heights are part of Syria.

UN Resolutions 242 and 338 stipulate that Israel must withdraw completely from these territories. Israel withdrew from the Gaza Strip in September 2005, but continues to build settlements in the other territories, actions deemed illegal by virtually all other states. Neither the Oslo Accords of 1993 nor the Road Map of 2003 led to a land agreement between the parties or a withdrawal by Israel.

Termination of all claims or states of belligerency and respect for and acknowledgement of the sovereignty, territorial integrity and political independence of every State in the area and their right to live in peace within secure and recognized boundaries free from threats or acts of force;

Companies and government institutions which profit from the occupation:

• Israeli government institutions, such as the army, which are directly involved in the Israeli occupation;

• Companies that supply weapons and security products and – services to the Israeli army;

• Companies involved in the construction of the Israeli separation wall between Israel and the occupied Palestinian territories; 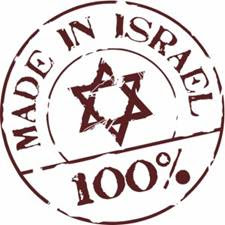 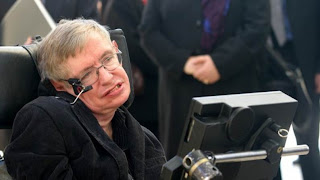 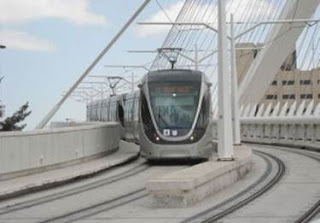 Abandoned by his parents and the Palestinian government, 3-year-old Mohammed has been at Tel Hashomer Hospital all his life 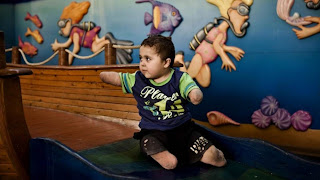 Born in Gaza with a rare genetic disease, Mohammed’s hands and feet were amputated because of complications from his condition, and the 3½-year-old carts about in a tiny red wheelchair. His parents abandoned him, and the Palestinian government won’t pay for his care, so he lives at the hospital with his grandfather.

“There’s no care for this child in Gaza, there’s no home in Gaza where he can live,” said the grandfather, Hamouda al-Farra.

“He can’t open anything by himself, he can’t eat or take down his pants. His life is zero without help,” he said at the Edmond and Lily Safra Children’s Hospital, part of the Tel Hashomer complex in the Israeli city of Ramat Gan.

Mohammed’s plight is an extreme example of the harsh treatment some families mete out to the disabled, particularly in the more tribal-dominated corners of the Gaza Strip, even as Palestinians make strides in combating such attitudes.

It also demonstrates a costly legacy of Gaza’s strongly patriarchal culture that prods women into first-cousin marriages and allows polygamy, while rendering mothers powerless over their children’s fate.

Mohammed was rushed to Israel as a newborn for emergency treatment. His genetic disorder left him with a weakened immune system and crippled his bowels, doctors say, and an infection destroyed his hands and feet, requiring them to be amputated.

In the midst of his treatment, his mother abandoned Mohammed because her husband, ashamed of their son, threatened to take a second wife if she didn’t leave the baby and return to their home in the southern Gaza Strip town of Khan Yunis, Farra said. In Gaza, polygamy is permitted but isn’t common. But it’s a powerful threat to women fearful of competing against newer wives.

Now Mohammed spends his days undergoing treatment and learning how to use prosthetic limbs.

His 55-year-old grandfather cares for him. Mohammed’s Israeli doctors, who’ve grown attached to the boy, fund-raise to cover his bills, allowing him and his grandfather to live in the sunny pediatric ward.

But it’s not clear how long he’ll stay in the hospital, or where he’ll go when his treatment is complete. As a Palestinian, Mohammed is not eligible for permanent Israeli residency. Yet his family will not take the child back, the grandfather said. His parents, contacted by The Associated Press, refused to comment.

As his grandfather spoke, Mohammed used his knees and elbows to scamper up and down a nearby stairwell, his knees and elbows blackened and scarred from constant pressure. He used his arms to hold a green bottle he found in a stroller. His prosthetic legs with painted-on shoes were strewn nearby.

He crawled toward his grandfather’s lap. “Baba!” he shouted, Arabic for “daddy.” ”Ana ayef,” he said — a mix of Arabic and Hebrew for “I’m tired.”

Dr. Raz Somech, the senior physician in the Tel Hashomer pediatric immunology department, attributes Mohammed’s genetic disorder to the several generations of cousin marriages in his family — including his parents.

In deeply patriarchal parts of Gaza — not in all the territory — men believe they have “first rights” to wed their female cousins, even above the women’s own wishes. Parents approve the partnerships because it strengthens family bonds and ensures inheritances don’t leave the tribe.

Repeated generations of cousin marriages complicate blood ties. It’s not clear what affect that has had on disability rates in Gaza; but Somech said a third of patients in his department are Palestinians and most have genetic diseases that were the result of close-relation marriages.

Some families hide the children, fearing they won’t be able to marry off their able-bodied children if the community knows of their less-abled siblings. And they are seen as burdens in the impoverished territory.

Some 183,600 Gaza residents — or 10.8 percent of the 1.7 million Gazans — suffer some kind of disability that affects their mental health, eyesight, hearing or mobility. Some 40,800 people suffer severe disability, the Palestinian bureau of statistics reported in 2011.

According to the bureau, two-thirds of young disabled Gazans are illiterate and some 40 percent were never sent to school, suggesting either their parents kept them home or did not have the means to educate them — a likely scenario in the territory, where about two-thirds of the population live under the poverty line. Over 90 percent of the disabled are unemployed, the bureau said.

Yet attitudes have been changing in Gaza.

“There’s been a lot of progress. It’s changing now, but of course, not to the level we want.”

There are greater efforts, by about 10 aid groups in Gaza, to increase opportunities for the disabled. Hearing-impaired Palestinians make boutique products in a Gaza center, “Atfaluna,” Arabic for “Our Children.” This year they opened a restaurant run by the hearing-impaired, further raising their visibility.

The hospital that is Mohammed’s home is a rare meeting ground for Israelis and Palestinians. With Gaza’s medical system often overwhelmed, patients often receive permits to receive treatment in Israel.

A generation ago, thousands of Palestinians, including Mohammed’s grandfather, worked in Israel. But Israel began restricting Palestinian movement over years of flaring violence, particularly since the militant group Hamas seized power of the coastal territory in 2007.

On a recent day at the children’s hospital, patients and medics chatted in Hebrew and Arabic. Women in Muslim headscarves strolled in a corridor. An Orthodox Jewish woman affectionately patted Mohammed on his head. She nodded kindly at Farra.

The Palestinian Authority in the West Bank is supposed to fund transfers to Israeli hospitals. But it stopped covering Mohammed’s bills six months after he arrived, Somech said. Palestinian health official Fathi al-Hajj said there was no record of the case.

There has been a growing number of cases where the Palestinian Authority stopped paying for patients because of its budgetary problems, Mor Efrat of rights group Physicians for Human Rights said.

Farra said he stepped in to care for Mohammed to save his daughter’s marriage. He sleeps beside Mohammed and ensures he’s clean and fed.

“Taking care of this child is a good deed,” he said.

But after years of caring for Mohammed, his grandfather said he wants to go home. He wished he could find a foster home or caregiver for Mohammed.

“He needs many things in his life,” Farra said, absentmindedly massaging Mohammed’s arm stump as the toddler rested on his lap. “He needs a home.”