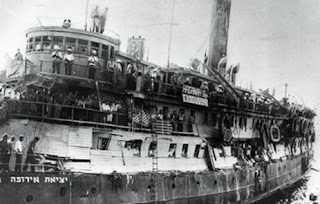 A senior Muslim Brotherhood official called on Jews who immigrated to Israel from Egypt to return to Egypt and leave Israel to the Palestinians, Egyptian daily Al-Masry Al-Youm reported on Friday.

Senior Egyptian Muslim Brotherhood offcial Essam el-Erian said in an interview to television station Dream TV that every Egyptian has the right to live in Egypt, and Egyptian Jews living in Israel were contributing to the occupation of Arab lands, according to  Al-Masry Al-Youm.

"Egyptian Jews should refuse to live under a brutal, bloody and racist occupation stained with war crimes against humanity," Erian said.

"Why did [former Egyptian president Gamal Abdel] Nasser expel them from Egypt?" Erian asked in the interview.

Several online newspapers reported in October that Some 1.7 million documents – purportedly containing details about the assets of Egyptian Jews in the 1940s, 50s and 60s – were seized by Egyptian security services just before they were exported to Israel.

A report in the Egyptian government-owned Al-Ahram daily newspaper holds that the “Jewish documents,” packed in 13 cartons, were confiscated by Egyptian authorities ahead of them being “smuggled” out of the country from Jordan.

Jews who lived in now long-gone or moribund Jewish communities in the Arab world have recently made headlines as Deputy Foreign Minister Danny Ayalon launched a campaign to have them recognized as refugees.

He said any property owned by these Jews from Arab countries – some of whom left in 1948, some throughout the 1950s, and others just after the Six-Day War of 1967 – must be included in discussions for compensation of refugees.

Ultimately, Ayalon argued, they should be considered refugees, just as Palestinians who fled during those years are – a controversial position that even some immigrants to Israel and their descendants dispute.

The deputy foreign minister said in October that he had no knowledge of the supposed documents that had been confiscated by Egyptian authorities.

Israel already has all the documentation it needs, he said.

Ilene Prusher contributed to this report.

In the report Human Rights Watch places blame squarely on terrorists in Gaza for the boy’s death. “Some rockets launched by Palestinian armed groups fell short and struck inside Gaza. On November 16, a rocket that appears to have been launched from within Gaza hit a crowded street in the Gazan town of Jabalya, killing a man, 23, and a boy, 4, and wounding five people.”

Human Rights Watch has acknowledged that terrorists killed civilians in Gaza during Operation Pillar of Defense when rockets being fired into Israel fell short.

“Rockets that fell short of their intended targets in Israel apparently killed at least two Palestinians in Gaza and wounded others,” Human Rights Watch said.

The specific case mentioned in the report involves the four year-old boy used as a political tool by Egyptian Prime Minister Hesham Kandil during his visit to Gaza.

Holding back tears, Kandil kissed the boy’s lifeless body as he was presented him by Hamas chief Ismail Haniyeh. Kandil said,”What I saw today in the hospital, the wounded and the martyrs, the boy … whose blood is still on my hands and clothes, is something that we cannot keep silent about.” At the time Israel strongly denied being involved in the boy’s death.

In the report Human Rights Watch places blame squarely on terrorists in Gaza for the boy’s death. “Some rockets launched by Palestinian armed groups fell short and struck inside Gaza. On November 16, a rocket that appears to have been launched from within Gaza hit a crowded street in the Gazan town of Jabalya, killing a man, 23, and a boy, 4, and wounding five people.”

The report, released Monday, accuses terror groups in Gaza of violating the laws of war. It states: “Under the laws of war, parties to an armed conflict are required to take all feasible precautions to protect civilians under their control from the effects of attacks and not to place military targets in or near densely populated areas. Human Rights Watch has not been able to identify any instances in November in which a Palestinian armed group warned civilians to evacuate an area before a rocket launch.”

The report continues: “The rockets launched by Palestinian groups cannot be aimed precisely enough to target military objectives in or near civilian areas. Under the laws of war, such weapons are therefore indiscriminate when used against targets in population centers.”