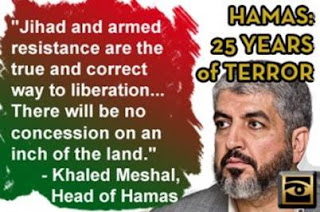 Much of the media covered the weekend’s events in Gaza, where Hamas leader Khaled Meshal commemorated his terror organization’s 25th anniversary.

What is Hamas really celebrating? Here are 25 facts to remind you:

1. Hamas takes its name from an acronym that means “Islamic Resistance Movement” in Arabic.

2. Hamas refuses to recognize the State of Israel’s right to exist as an independent, sovereign nation, and is totally opposed to any agreement or arrangement that would recognize its right to exist. At the beginning of its charter there is a quotation attributed to Hassan Al-Bana, the Muslim Brotherhood’s founder, that “Israel will arise and continue to exist until Islam wipes it out, as it wiped out what went before.”

3. Hamas is committed to jihad. Its charter stresses the importance of jihad (holy war) as the main means for the Islamic Resistance Movement (Hamas) to achieve its goals: An uncompromising jihad must be waged against Israel. Jihad is the personal duty of every Muslim.

4. Hamas is an anti-Semitic organization. According to its charter, the Jewish people have only negative traits and are presented as planning to take over the world. The charter uses myths taken from classical European and Islamic-based anti-Semitism.

5. The Hamas Charter includes anti-Semitic myths taken from The Protocols of the Elders of Zion (mentioned in Article 32) regarding Jewish control of the media, the film industry and education (Articles 17 and 22). The myths are constantly repeated to represent the Jews as responsible for the French and Russian revolutions and for all world and local wars: “No war takes place anywhere without the Jews’ being behind it” (Article 22). The charter demonizes the Jews and describes them as brutally behaving like Nazis toward women and children (Article 29).

6. Hamas is the local Palestinian branch of the Muslim Brotherhood, which recently took control of the Egyptian government.

7. Hamas is designated as a terrorist organization by Israel, the United States, Canada, the European Union and Japan.

8. Although members of the international community have proposed treating the political and military wings of Hamas as separate entities, the Hamas infrastructure places the political wing at the command of the military wing. As Hamas founder Sheikh Ahmad Yassin stated in 1988: “We can not separate the wing from the body. If we do so, the body will not be able to fly. Hamas is one body.”

9. Hamas’s first ever suicide bombing took place on April 16, 1993 when a suicide bomber detonated the car in which he was driving at the Mehola Junction near Beit El.

10. On January 27, 2002, the first female Palestinian suicide bomber, Wafa Idris, blew herself up on Jaffa Street in the heart of downtown Jerusalem, killing one person and injuring about 100 more. Hamas claimed responsibility.

11. Hamas has been responsible for many appalling acts of terror including the suicide bombing in the Park Hotel in the coastal city of Netanya, in the midst of the Passover holiday seder with 250 guests. Hamas claimed responsibility for the attack in which 30 people were killed and 140 injured – 20 seriously.

12. In December 2011, Hamas “celebrated” its 24th anniversary, boasting that it had killed 1365 “Zionist soldiers” since 1987. Hamas does not differentiate between Israeli soldiers and civilians.

13. Hamas won a four year term at the head of the Palestinian Legislative Council in 2006 but remains in office indefinitely.

14. In June 2007, Hamas took control of the Gaza Strip through a violent coup, killing numerous Palestinians, some by pushing them off of tall buildings in Gaza. The Red Cross estimated that at least 118 people were killed and more than 550 wounded during the fighting in the week up to June 15.

15. Hamas members use Palestinian children as human shields when carrying out attacks on Israeli soldiers.