British minister tells PM: London supports directive because ‘we believe discrimination is not appropriate and should be stood up to’

“I want to commend the British government for refusing to discriminate against Israel and Israelis and I commend you for standing up for the one and only true democracy in the Middle East,” Netanyahu said at a joint press conference in Jerusalem with British Cabinet Office Minister Matthew Hancock.

Netanyahu drew parallels between efforts to boycott Israel and a long history of anti-Semitism and a current anti-Israel bias in the international community.

“In modern times, modern anti-Semitism not only attacks individual Jews, but attacks them collectively, and the slanders that were hurled over centuries against the Jewish people are now hurled against the Jewish state,” he said.

Hancock told Netanyahu that London supported the measure “because we believe in an open and free trade and we believe that discrimination is not appropriate and should be stood up to.”

“Any public body found to be in breach of the regulations could be subject to severe penalties,” said a statement issued Wednesday by Hancock. 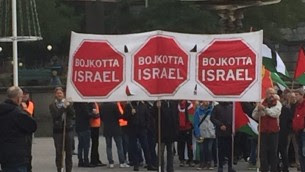 At the same time, the statement affirmed Britain’s commitment to the European Union’s recently approved guidelines requiring member states to label products made in West Bank settlements to be labelled as such.

The new labeling rules, which also apply to the Golan Heights and East Jerusalem, underscore the EU’s unhappiness over Israel’s continued expansion of settlements on territory that Palestinians are seeking for a future state.

The move, announced late last year, drew harsh condemnation from Israeli ministers, who said the move was tantamount to a boycott, with some charging it was a form of classic European anti-Semitism.