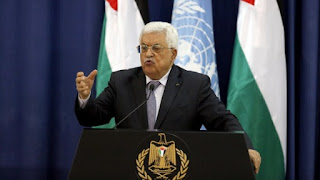 AFP — Three months into a wave of violence some have likened to a new uprising, the Palestinian Authority has found itself adrift and increasingly out of touch with frustrated youths behind the unrest, analysts say.

There is even speculation of an eventual collapse of the PA, the governing authority set up under the 1990s Oslo accords that were meant to lead to a final peace deal.

“Young people see no political horizon and suffer from economic crisis and unemployment,” with nearly half jobless compared with more than 27 percent of the overall population, said Ghassan Khatib, vice president of Birzeit University near Ramallah and a former Palestinian cabinet minister.

Young Palestinians see little hope of an independent state more than two decades after the Oslo accords — and many do not feel PA President Mahmoud Abbas represents their concerns.

They have come of age as Israeli settlement building has continued and with their own political leadership deeply fractured.

In a recent poll, two-thirds of Palestinians said they believed a new armed intifada would serve “national interests” better than negotiations. 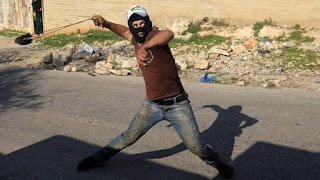 A Palestinian protester uses a slingshot to hurl rocks towards Israeli security forces during clashes near Nablus on December 11, 2015 (AFP/Jaafar Ashtiyeh)

Security coordination between the Palestinian Authority and Israel has at the same time been maintained, an arrangement some analysts say is vital for Abbas to keep hardliners who oppose him in check.

Palestinian elections have not been held in a decade due to the bitter split between Hamas, the Islamist movement which rules the Gaza Strip, and Abbas’s Fatah, based in the West Bank.

Abbas’s mandate expired in 2009 but he remains in office because there have been no polls. The Palestinian parliament last met in 2007, following a general election the previous year won by Hamas.

“The leaders are incapable of satisfying their (young Palestinians’) political and economic demands,” said Khatib.

He said Palestinian politics “is at an impasse and incapable of reinventing itself.”

‘We will not shed a tear’

The unrest has seen violent protests as well as a wave of Palestinian knife, gun and car-ramming attacks against Israelis.

Palestinian terrorism and violence since the start of October has claimed the lives of 25 Israelis, an American and an Eritrean. On the Palestinian side 139 people have been killed, most of them while carrying out attacks. Most of the rest were killed in clashes with Israeli security forces.

A large portion of the attackers have been young people, including teenagers.

In the early stages of the unrest, PA security forces allowed crowds to approach checkpoints, where they protested and clashed with Israeli security forces.

“Since then, they have increased their presence,” said Seif al-Islam Daghlas of the Birzeit student council.

“Especially when US Secretary of State John Kerry came (in November), we saw Palestinian security was now stopping our protests.”

Such an intervention could be seen recently when PA security forces in plainclothes violently dispersed protesters moving toward an Israeli checkpoint on the outskirts of Ramallah. 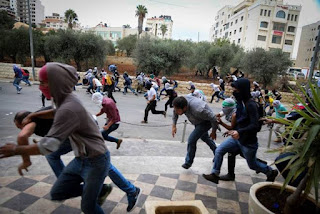 Palestinian protesters hurling stones clash with Israeli troops (not seen) during riots by the Jewish settlement of Bet El, near the West Bank city of Ramallah, October 10, 2015 (Flash90)

Kerry’s visit and other international efforts have failed to restore calm, and the US secretary of state even warned in early December about the potential repercussions of a Palestinian Authority collapse.

“Without the PA security forces, the IDF (Israel Defense Forces) could be forced to deploy tens of thousands of soldiers to the West Bank indefinitely to fill the void,” Kerry said.

“Are Israelis prepared for the consequences this would have for their children and grandchildren who serve in the IDF when the inevitable friction leads to confrontation and violence?”

Israel’s government has also reportedly held discussions on the possibility of the PA falling apart.

For Mohammed Shtayyeh, a high-ranking Fatah member and Palestine Liberation Organisation official, the collapse of the PA, which remains heavily dependent on international aid, would mean little.

More than 60 percent of the West Bank is already under complete Israeli control.

“Should Israel cause it to collapse by imposing more restrictions, we will not shed a tear because at the end of the day the true head of the West Bank is the Israeli military governor,” he said, referring to the Israeli defense ministry unit that manages civilian affairs in the Palestinian territories.

Where the unrest will lead is a constant topic of debate among both Israelis and Palestinians.

Khalil Shikaki, whose Palestinian Center for Policy and Survey Research conducted the poll showing growing frustration among Palestinians, said the situation was tenuous.

“If someone commits a serious error one day, such as the Israeli army killing many people or the demoralized Palestinian security forces turning their guns on Israelis,” a significant escalation could occur, he said. 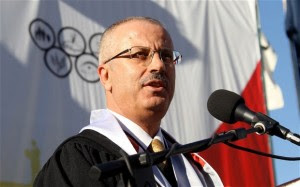 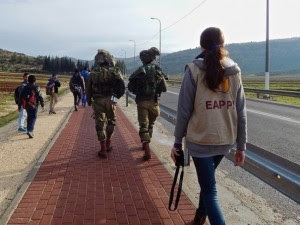