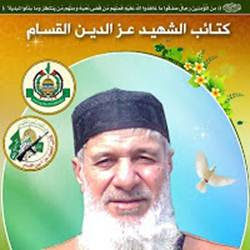 At approximately 17:45 on Sunday, an Israeli warplane fired a missile at a group of Palestinian civilians near al-Rahma Mosque in al-Nussairat refugee camp. As a result, 2 civilians were killed: Atiya Abdullah Mubarak, 56; and Hussam Hussein Abu Shawish, 37.

Hamas' Al Qassam website describes Atiya Mubarak as one of their mujahadeen, despite his age. He joined Hamas in 1998 and the Al Qassam Brigades in 2007. He participated in Cast Lead and worked on logistics behind sending terrorists to battle, "competing with the youth in jihad for the sake of Allah."

At approximately 16:30, an Israeli drone fired a missile at a number of Palestinian civilians in al-Salatin Street in Beit Lahia, killing one of them, Fadi Mousa Sameer al-Qatanani, 29, and 6 others, including two children, were wounded. 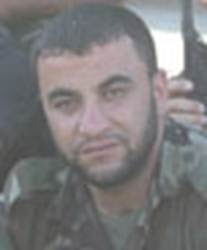 The Al Qassam website says that "since Fadi was a child, he wished to carry a gun to fight the enemies of God, the Jews; constantly repeating slogans of jihad, his eyes yearning to jihad and martyrdom, and the castles of glory and honor and dignity."

He was a member of the Qassam Brigades for over ten years, working in smuggling tunnels as well as "repelling invasions" from Israel in northern Gaza.

Israel responds to Palestinian move at UN: Israel decided Thursday to approve the construction of an additional 3,000 housing units in Jerusalem and the West Bank.

In addition, the planning procedures of thousands of additional housing units in Jerusalem and the settlement blocs will be furthered, including in the segment connecting Ma'ale Adumim with Jerusalem, known as the E1 project.

State officials said Israel was considering further moves in response to the United Nations General Assembly's recognition of Palestine as an observer state.

The decision was made by the government's top nine ministers. A state official said the continuation of construction was done in accordance with the map of Israel's strategic interests.

Palestinian President Mahmoud Abbas' spokesman, Nabil Abu Rudeineh, commented on the Israeli decision, saying that "this declaration is a slap in the face of the entire world which chose to vote in favor of the Palestinian state."

Abu Rudeineh noted that the decision was illegal, adding that "this action will leave Israel even more isolated, after the entire world expressed its objection to the occupation yesterday."

Palestinian negotiator Saeb Erekat condemned Israel's announcement, saying it was "defying the whole international community and insisting on destroying the two-state solution." He said the Palestinian leadership is studying its options.

Hanan Ashrawi, a member of the PLO's Executive Committee, condemned the expansion of Israeli construction beyond the Green Line as well. "This is Israeli aggression against the Palestinian state and the world must take responsibility," she told AFP.

"What was announced today is only part of a comprehensive settlement plan," she said.

The American administration criticized the decision as well. State Department Spokeswoman Victoria Nuland said that such actions impeded peace, stressing that direct negotiations were the only solution.

On the eve of the UN vote, the political echelon had planned to practice restraint over the Palestinian move, particularly so as not to make the world turn on Israel, but state officials said that in light of the talk of a diplomatic failure and the fact that the country is in the midst of an election campaign, Prime Minister Benjamin Netanyahu found it difficult to avoid a significant response.

Eventually, the prime minister decided to order a massive construction boom in settlements and Jerusalem neighborhoods located beyond the Green Line.

In earlier discussions on the proper Israeli response to the move, senior sources warned that a decision to build in the settlements would be interpreted by the international community as a measure of punishment against the Palestinians.

They suggested that Netanyahu wait so that the UN vote would not be linked to the decision to build in the settlements, but Netanyahu chose to respond immediately rather than wait.

Canada to review its relationship with PA

The Israeli decision is expected to spark harsh criticism in the international community, particularly the decision to further planning procedures in the segment connecting Ma'ale Adumim and Jerusalem, as this is perceived as an Israeli attempt to prevent territorial continuity within the future Palestinian state.

Israel is not the only country responding to the Palestinian move. Canada's foreign affairs minister is temporarily recalling senior diplomats from Israel, the West Bank and the United Nations missions in New York and Geneva to assess the implications of Thursday's UN General Assembly vote.

Baird said he was deeply disappointed by the UN vote, in which Canada joined Israel, the United States and a few other countries in voting "no." He said the only way to peace in the Middle East was through negotiations, not what he called "unilateral actions."

Baird called the General Assembly decision an impediment to peace.

Itamar Eichner is a Ynet and Yedioth Ahronoth correspondent

The infrastructure in Gaza has been deteriorating in recent years and the area is now "choked with untreated sewage," the Bank said, according to AFP.

"We are concerned about the lack of clean water supply and the deterioration in the quality of water resources," Mariam Sherman, World Bank Country Director for theWest Bank and Gaza, said in a statement.

"The new project is very important to Gaza citizens. Not only will it increase the sustainability of water and sewage networks, but it will also allow the utility to better serve the needs of their customers."

The World Bank has come to the rescue of Hamas, giving it $6.4 million to improve water and sewage services after the latest escalation in attacks on Israel that drew Israel into the eight-day Pillar of Defense counterterrorist campaign.

The Islamic Development Bank is contributing an additional $11.1 million, but there has been no report of safeguard measures to ensure that some of the money will not be used for more weapons for future attacks on Israel.

The infrastructure in Gaza has been deteriorating in recent years and the area is now "choked with untreated sewage," the Bank said, according to AFP.

"We are concerned about the lack of clean water supply and the deterioration in the quality of water resources," Mariam Sherman, World Bank Country Director for theWest Bank and Gaza, said in a statement.

"The new project is very important to Gaza citizens. Not only will it increase the sustainability of water and sewage networks, but it will also allow the utility to better serve the needs of their customers."

The latest project will fund the construction of water tanks, the connection of major wells to the supply grid and the reduction of costly leaks.

It will also be aimed at helping the local utility to enhance billing and customer services, the Bank said.

Leadership is needed now. President Abbas must stop the journey in the wrong direction--appealing to the United Nations--turn away from the cliff, and return to the negotiating table. The path to peace begins with the seven minutes between Jerusalem and Ramallah, not on UN podiums. Going to the UN General Assembly is a mistake.

Israel continues to seek a solution of two states for two peoples, the Jewish state of Israel next to an Arab state of Palestine, side by side in peace and security.