Seventh in a series: 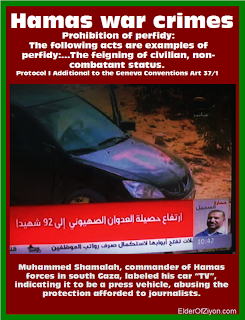 From the IDF blog:

When terrorists disguise themselves as civilians, it can only end badly for civilians. Today, a senior Hamas operative was targeted while driving a press vehicle, effectively disguising himself as a reporter. By doing so, he risked the lives of all journalists in the Gaza Strip.

Over the past several days, the IDF has carefully pinpointed and targeted sites used by terror groups in the Gaza Strip, most notably the Hamas and the Islamic Jihad. Terrorists complicate the task by systematically using civilian facilities and locations as a cover for their operations.

The “human shield” method, as it is commonly known, has forced the IDF to target seemingly non-military targets, resulting in some of the civilian casualties. It has also endangered all residents of the Gaza Strip who, without their consent, were unwittingly dragged into the conflict.

One such example came in today, when a senior Hamas operative was targeted while driving a press vehicle. Muhammed Shamalah, commander of Hamas forces in the southern Strip and head of the Hamas militant training programs, was targeted by an Israeli air strike while driving a car clearly labelled “TV”, indicating it to be a press vehicle, abusing the protection afforded to journalists.