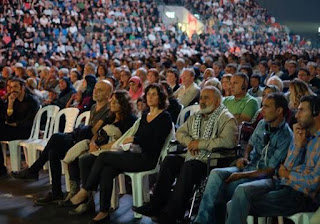 Some 3,000 Israelis and Palestinians, including hundreds from the West Bank, participated on Tuesday in an Israeli-Palestinian Remembrance Day ceremony that was held for the 11th consecutive year in Tel Aviv on the eve of Memorial Day.

The ceremony included speeches by bereaved family members who are active in different forums promoting dialogue, reconciliation, and nonviolence in Israel. The ceremony included performances and speeches by some notable artists such as Ohad Naharin, the artistic director and choreographer of the Batsheva Dance Company, Shaa'nan Street, the lead vocalist of 'Hadag Nahash' and the Arab-Jewish women's choir 'Rana'.

The ceremony was also attended by several MKs including Zehava Galon and Issawy Frej from Meretz and Dov Khenin from the Joint List.

The ceremony took place for the first time 11 years ago as an initiative of Buma Inbar who lost his son Jotam in 1995 while serving with the Golani Brigade in Lebanon. Since then, the ceremony has provided an alternative platform for bereaved families in addition to the official ceremonies.

In a meeting prior to the ceremony that was held in the shadow of tensions at the Gaza border, Combatants for Peace activist and Co-founder, Suliman Khatib, said that the movement is also facing challenges at home.

"The main opponents we have in the Palestinian society are the 'Anti-Normalization' advocates," he explained.

"There will always be people who would prefer to stay at the 'comfort zone' and would stick with old habits".
Khatib referred to the inauguration of the Nelson Mandela Square in Ramallah last month and stressed out that "his way is the way of movement – combating without violence".

Dozens gathered outside the joint ceremony to protest against it. As participants entered the ceremony, protesters holding blue and white flags shouted slogans such as, "There is no such thing as Palestinian people," and called the participants traitors.

Nir, one of the protesters, told The Jerusalem Post that he thinks that having such ceremony is unacceptable.
"I am shocked. I can't believe that on the day that we mourn our soldiers, some of us find it right to mourn the loss of Palestinians," he said.