Tzipi Livni. Photo by Olivier Fitoussi
WASHINGTON D.C. - Justice Minister Tzipi Livni, spoke on Saturday night at the opening of the annual J Street conference in Washington D.C. During her speech, Livni said that Israel must advance the peace process, not as a favor to the United States or the Palestinians, but because doing so is in Israel's best interest.

Livni, who also heads the Israel negotiating team during the ongoing peace talks with the Palestinians, stated that she traveled to the conference in order to say that "we can love Israel and search for peace at the same time," and further, "those who love Israel must search for peace."

The Israeli justice minister also said that the two-state solution is the only way for Israel to preserve its identity both as a democratic and Jewish state. "These two words: Israel and peace are not contradictory words; they live together, they must live together and don't let anybody convince you otherwise," said Livni.

According to Livni, the words peace and security are also not contradictory, and Israel doesn't need, or intend to place one above the other. Livni beseeched the J Street audience, "in your quest for peace, don't abandon Israel's security needs." She added that Israel resides in a tough neighborhood, "and even after a peace agreement is reached it will be a tough neighborhood."

Livni also said that a peace agreement with the Palestinians would create many opportunities for Israel in regard to its relations with other Arab states that share mutual interests with Israel – including putting a stop to Iran's nuclear program. "We are not the only ones who see the grave threat coming from a nuclear Iran or from extreme fundamentalist Islam. We have common interests with other Arab states that, unfortunately, feel they cannot express this because of the conflict. Peace with the Palestinians can change that," said Livni.

Livni also pointed out that she believes in dialogue with Jews in the diaspora, despite disagreements and varying opinions. She called on Jews throughout the world, despite their differences, to unite against de-legitimization of Israel and the IDF.

"I don't ask the world to turn a blind eye to our military action," said Livni. "I ask them to judge us according to the same values that they apply to themselves. The same values that they preach for. No democracy, no legal system would compare killing by mistake in a car accident to a premeditated murder. I am not willing to accept any comparison between a terrorist who is targeting children in school and an Israeli soldier defending against that terrorist."

Livni continued, "I know that Israel's soldiers would do everything they can in order to avoid loss of innocent life."

"The months ahead present a rare opportunity to reach that historic compromise that ends the Israeli-Palestinian conflict," said J Street founder and chairman Jeremy Ben-Ami , who also spoke at the conference.

"It will always be J Street's fundamental credo that the only solution to this conflict is establishing a national homeland for each of the two peoples," said Ben-Ami.

Israeli director and cinematographer Dror Moreh also spoke at the conference on Saturday. Moreh directed the Oscar-nominated documentary, entitled "The Gatekeepers," in which he interviewed five former heads of the Israeli Shin Bet.

Moreh spoke about his motivations behind making the film, and stated that he chose to interview heads of the Shin Bet because of the significant role they played in shaping the nature of the Israeli-Palestinian conflict.

"Today only the margin of Israeli society is aware of the price this existence is costing" said Moreh, while explaining his motivation for making the film.

The conference, titled “Our Time to Lead,” could be read as J Street’s aspiration to community leadership as much as an urgent call for American involvement in advancing the peace process.

Though it has dominated Middle East headlines for the past months, Syria does not feature at all on the J Street schedule. Iran, with nuclear ambitions seen by Jerusalem as a more pressing existential threat than the conflict with the Palestinians, merits a single session.

Ben-Ami recently said that J Street was taking its cue from a U.S. administration that has placed a premium on keeping the Israeli-Palestinian talks going.

“The real core mission of J Street is to demonstrate that a lot of people who care deeply about Israel strongly support what the president and the secretary of state have laid out this year,” he said.

U.S. Vice President Joe Biden will be the keynote speaker at the J Street annual conference at the end of September, making him the highest-level American official to address the organization since it was founded five years ago.

Biden will speak before an estimated 3,000 participants on September 30.

J Street describes itself as an American Jewish organization that supports Israel and the peace process and promotes the two-state solution. It has marked itself since its founding as supporting Obama and his efforts to advance the peace process. Recently, however, it has decided not to decide on whether to support a possible U.S. strike on Syria.

J Street was founded as a counterweight to veteran Israel advocacy group AIPAC, which is more conservative, particularly on the Palestinian issue. The organization leveled scathing criticism at Israeli government policy during Netanyahu’s last term, particularly with regard to settlement construction. J Street’s ties with Israel’s embassy in Washington and with the government in Jerusalem were tense at first, but relations have improved over the past two years, and last year Baruch Bina, the embassy’s No.2 diplomat, addressed the organization’s conference.

Key Traits: Thinks there’s a conspiracy of website moderators to stop them bringing the truth to the people. Like a Russian novelist in a gulag, they write not knowing if the world will ever read their words.
Typical Quote: “Not that the mods will dare publish this comment, of course.” 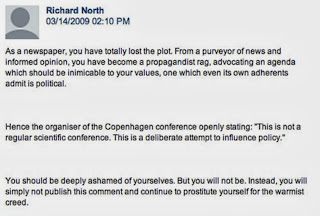 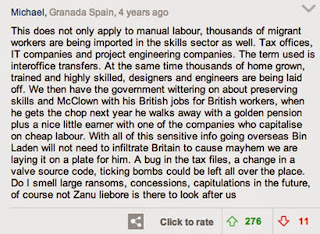 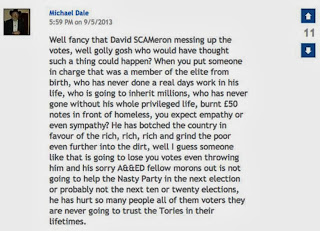 Key Traits: Just really interested in how much the journalist earned for the article they’re commenting on.
Typical Quote: “Did you get paid to write this?”

Key Traits: They are the last bastion of defence against the imminent collapse of society. They have their principles and they will defend them to the death.
Typical Quotes: “We did not fight two world wars to have Energy Saving Lightbulbs foisted on us. The people of this country will not stand for it.”; “The silent majority will roar.”

5. That bloke who just spends an awful lot of his time thinking about gay sex.

Key Traits: Really not happy about gay people. All those gays, having all their gay sex with other gays. Gayly.
Typical Quote: “I have no problem with gays, I’m just sick of them ramming it down my throat.” 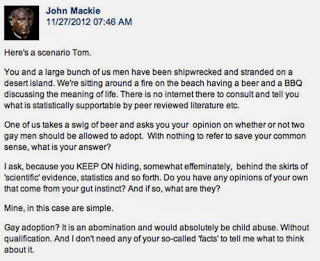 Key Traits: Are racist.
Typical Quote: “I’m not a racist, but…”

Key Traits: Not constrained by the normal boundaries of bigotry, they improvise and riff on classic hatreds to create crazy new freeform bebop slurs so unique that you can only think, Wow, I had no idea that could even be a prejudice.
Typical Quotes: There are no typical jazz bigot quotes. 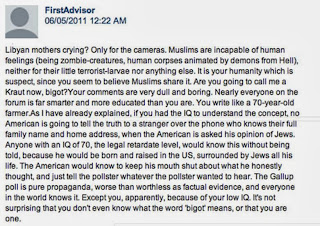 Key Traits: They believe they have spotted a spelling, punctuation, or grammar error in the article and THUS THEY WIN THE INTERNET FOREVER.
Typical Quote: “Maybe you should learn some basic English skills before writing for a national publication.”

9. The people who don’t realise websites can have more than one thing on them.

Key Traits: Does not think this thing they have just read is news. Consistently really baffled to find things like music news or TV reviews in the entertainment section of a website. Steadfast in their belief that news sites can only cover one story at a time.
Typical Quotes: “How is this news?”; “You do realise there’s a war in Syria, right?”

10. The ones whose points are fatally undermined by the fact they also filled out the “location” bit of the comment form.

Key Traits: Really angry about immigrants (while living in another country). Very keen to tell people about the horrific reality of living in the inner city (despite the fact they live in a small village in Cumbria). That sort of thing.
Typical Quote: “It’s a disgrace how these foreigners flood our country and never try to integrate into British society.” — Barry, Costa del Sol

12. …and commenters with reasonable, informed, well-argued points that illuminate the issue and bring fresh perspectives to the debate.