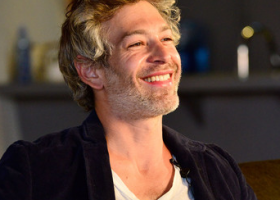 This is a press release from the "State of Palestine" that is filled with easily provable lies. And the PLO has no problem lying to the media because they know that no reporter will ever question them.

Every once in a while it is worthwhile to remind ourselves how easily and publicly the PLO lies.

The Negotiations Affairs Department of the PLO released a fictionsheet (calling it a factsheet would be wildly inaccurate) about Silwan in which virtually every sentence is a lie.

The paper says that Silwan has a population of 55,000. If that is true, than the 700 Jews who live there take up about 1% of the population. "Ethnic cleansing" has never been so benign.

As part of Israel's colonial enterprise, Israeli settler organizations have consistently sought to expand their control over Silwan through various of means. One of the most common colonial tactics Israel implements in Silwan is the forced eviction of Palestinian families from their homes so as to replace them with Israeli Jewish families.

Translation: Jews are buying the houses and moving in. If the Arab squatters don't leave, the police force them out. Like in everywhere else on Earth.

[T]he people of Silwan struggle daily to protect their presence and preserve the town's heritage against sustained settlers attempts to colonize and Judaize Silwan, while cleansing the village of its indigenous, Palestinian native population.

The Kfar HaShiloach neighborhood, which is being claimed by Jewish organizations, was literally empty until the 1880s when Yemenite Jews moved in and built housing. 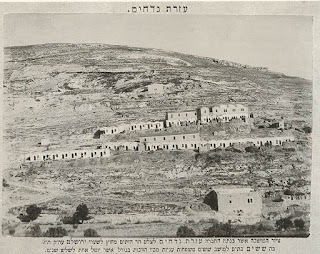 .
Here's how the PLO describes these homes:

Batin El-Hawa is located in Al-Hara Al-Wusta (central quarter) of Silwan. The settler organization, Ateret Cohanim, has claimed proprietorship of strategic land parcels covering an area of 5,130m².  The organization also claims that the land and the buildings on it belong to a Yemenite Jewish endowment. Yemenite Jews lived in the area during the Ottoman era only to leave immediately following the breakout of Al-Buraq Revolution almost 100 years ago. At that time, the Yemenites leased the land and homes to Palestinians from Silwan who have continued to live on and use the land ever since. Some 500 Palestinians currently live in the area. 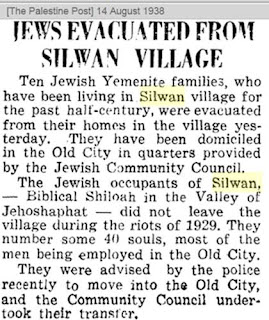 Here's the truth: Arabs attacked and killed Jews there in 1921 and again, more violently, in 1929. Almost all the Jews there were forced to flee for their lives. Ten families remained butThe British couldn't protect them and ordered the remainder to evacuate during the 1936-39 riots.

The only ethnic cleansing that ever happened in "Silwan" was against Jews.

Furthermore, if the Arabs are now leasing the land from these Yemenites, then the PLO is admitting that the Jews legally own the buildings, right? I'm sure the residents can show that they've paid their lease to the Jews for the past 85 years.

This is a press release from the "State of Palestine" that is filled with easily provable lies. And the PLO has no problem lying to the media because they know that no reporter will ever question them.