Khaled Mashaal has ordered his forces to prepare for a Gaza-style takeover of the Palestinian territory, the Sunday Times reports 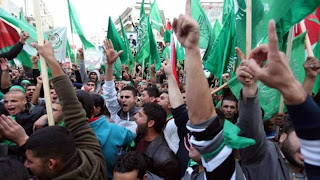 Senior officials in Jerusalem reportedly believe a Gaza-style takeover of the West Bank by Hamas may be in the offing, citing intelligence estimates that show the Iran-backed terror group making a move for control of the Palestinian-ruled territory.

Military Intelligence and the Shin Bet security service both have information that Hamas political chief Khaled Mashaal has ordered his supporters to prepare for a battle for control of the West Bank, the Sunday Times reported on Sunday.

The move is feared by both Israel and the Palestinian Authority’s ruling Fatah party, which has seen its popularity on the Arab street wane in the face of the more hard-line Hamas movement.

“We’re on the verge of catastrophe,” Tawfik Tirawi, a senior Fatah member, told the paper. ”Hamas wants intifada  and now only a spark is needed to light the inferno. Hamas will take over the West Bank.”

Jerusalem fears that a Hamas takeover of the West Bank would give Iran, which is allied with the group, a foothold on the border of Israel’s heartland, the report said. Reportedly, Iran is the driving force behind Hamas’s push to control the West Bank.

A source close to Prime Minister Benjamin Netanyahu told the paper that the prime minister is maneuvering to halt Iran and Hamas from gaining dominion of the territory.

“[Netanyahu] understands the geopolitical changes in the Middle East. No way would [he] give up an inch of the West Bank — he is convinced that the intelligence assessment about a [Hamas] takeover is solid,” the source said.

In 2007, Hamas broke with its rival Fatah, taking over the Gaza Strip by force and pushing out the armed wing of the secular Palestinian movement.

Both sides have made overtures toward unity in the past month, however, in the wake of Operation Pillar of Defense, Israel’s eight-day mini-war with Hamas.

Earlier this month, Hamas rallies in the West Bank cities of Nablus, Ramallah and elsewhere drew thousands, a sign of the movement’s growing influence in the territory.

The West Bank has seen an uptick in violence over the last month, since Operation Pillar of Defense, though the army says it is under control and not a harbinger of a third intifada.

A senior Hamas leader called on Tuesday for a third intifada and the resumption of suicide bombings against Israel.

The demand came in response to the government’s recent decision to approve the construction of hundreds of housing units in east Jerusalem and Ma’aleh Adumim.

Ahmed Halabiyeh, director of the Jerusalem Department in Hamas, said that armed Palestinian groups, including Hamas, should initiate a confrontation with Israel over its plans to build new apartments in Jerusalem and its suburbs.

The Palestinians, he added, should resort to various methods of resistance, first and foremost “martyrdom operations in the heart of Israel.”

He urged Palestinians to “ignite a third intifada to save the Aksa Mosque and Jerusalem.”

The “enemy is waging a fierce onslaught on Jerusalem and accelerating plans to Judaize the city geographically and demographically,” he told reporters in Gaza City.

Israel, he charged, was spreading the “cancer of settlements to all parts of Jerusalem.”

The Hamas official also accused Israel of working to undermine the foundations of the Aksa Mosque to bring about its collapse so it could replace the structure with the Third Temple.

Halabiyeh urged Arabs and Muslims to declare a state of full mobilization to “liberate Jerusalem, the Aksa Mosque and Palestine.”

Also on Tuesday, the Palestinian Authority warned that the recent Israeli plans to build new housing projects in Jerusalem would undermine the two-state solution and foil international efforts to reach a just and comprehensive peace in the region.

Nabil Abu Rudaineh, spokesman for the PA presidency, said that the government’s plans would eventually lead to a one-state solution.

The “State of Palestine would take all available measures to respond to the Israeli plans, which are a red line that the Palestinians won’t allow to be implemented,” he said.

Abu Rudaineh also condemned Israel’s decision to withhold tax and customs revenues belonging to the PA as a “criminal and aggressive act.”

Israel would have to bear the consequences of its actions, he declared.