Source: IDF targeted missiles in transit to Hezbollah from Iran. 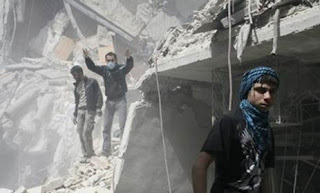 People search for survivors in the rubble in a damaged area in Syria Photo: REUTERS/Aref Hretani

The Israel Air Force struck storage facilities near Damascus housing Iranian Fateh-110 missiles destined for Hezbollah overnight Sunday for the second time in 48 hours – according to foreign media reports – sending flames and the sounds of blasts throughout the city.

Amateur footage shot by Syrian civilians showed several blasts, suggesting that the missiles caught on fire and were causing secondary explosions, at a site on top of Mount Qassioun, overlooking northwest Damascus.

Although the Israeli defense community believes the chances of direct Syrian or Hezbollah retaliation are low, since they are devoting their resources to the Syrian civil war and are vulnerable to Israeli air power, the IDF took a number of precautions on Sunday afternoon.

Arkia Israel Airlines said that "due to IDF instructions on the closure of airspace in the North until May 9, Arkia is forced to announce the cancellation of domestic flights from Haifa to Eilat."

The IDF said only that northern civilian airspace was being jointly managed by the IAF and civil authorities in accordance with the latest evaluations.

"The sky was red all night. We didn't sleep a single second. The explosions started after midnight and continued through the night," one man told Reuters from Hameh, close to Jamraya, northwest of Damascus.

Syrian state television claimed the bombing occurred around a military research facility at Jamraya. It quoted a letter from Foreign Minister Walid al-Muallem to the United Nations saying: "The blatant Israeli aggression has the aim to provide direct military support to the terrorist groups after they failed to control territory."

A Western intelligence source told Reuters: "In last night's attack, as in the previous one, what was attacked were stores of Fateh-110 missiles that were in transit from Iran to Hezbollah."

The Al-Mayadeen Lebanese television channel, affiliated to Iran and Hezbollah, said four people were killed and 70 were wounded in the attack. The same news agency claimed that Syria had pointed missiles in Israel's direction.

Ghassan bin Jiddo, head of programming for Al-Mayadeen, warned on Sunday that a response would definitely come, adding that if Israel responded to the retaliation, that would signal the beginning of a war.

In the hours following the strikes, CNN quoted Syrian Deputy Foreign Minister Faisal Mekdad as saying that the action was "declaration of war."

Later the Syrian information minister, Omran al-Zoabi, held a press conference in Damascus following a meeting of the cabinet, and said, "The Israeli enemy exhibited gross aggression against Syria and used missiles to bomb military facilities in violation of all international law. This aggression opens the door to all options, and made the region more dangerous."

Islamic Jihad in the Gaza Strip threatened to join any retaliation from Syria.

The Iranian Foreign Minister Ali Akbar Salehi urged countries to resist Israel, while a senior Iranian commander said Syria was strong enough to defend itself without Tehran's help – though he offered training.

"As a Muslim nation, we back Syria, and if there is need for training we will provide them with the training, but won't have any active involvement in the operations," the general said in remarks reported by the official IRNA news agency.

It did not identify where the film was shot.

Some opposition activists said they were glad strikes may weaken Assad, even if few Syrians have any liking for Israel.

"We don't care who did it," said Rania al-Midania in Damascus. "We care that those weapons are no longer there to kill us."

Egypt condemned the reported Israeli attack on Syria on Sunday, saying it complicated a crisis that Cairo was trying to help resolve.

In a statement, Egypt's presidency said the attack was a violation of international law and a threat to regional security and stability that "made the situation more complicated."

UN Secretary General Ban Ki-Moon called on all sides to "exercise maximum calm and restraint, and to act with a sense of responsibility, according to his spokesman.

"The secretary-general urges respect for national sovereignty and territorial integrity of all countries in the region, and adherence to all relevant Security Council resolutions," the spokesman said.

Republican Sen, John McCain said the latest Israeli air strikes will put more pressure on the US administration to act, although President Barack Obama had said he had no plans to send ground troops to Syria.

"We need to have a game-changing action, and that is no American boots on the ground, establish a safe zone and to protect it and to supply weapons to the right people in Syria who are fighting, obviously, for the things we believe," McCain said on Fox News Sunday.

"Every day that goes by, Hezbollah increases their influence and the radical jihadists flow into Syria and the situation becomes more and more tenuous," he said.