How the UN counts terrorists as civilians

The UN doesn't count he casualties in Gaza directly. They get the data from a consortium of "human rights" groups: the Palestinian Center for Human Rights, Al Mezan, and B'Tselem, which they call the"Protection Cluster." Based on the data they receive from these groups they publish their statistics of whether the dead in Gaza are civilian or "members of armed groups."

I've already shown in great detail how PCHR (and, indirectly, Al Mezan) classified hundreds of members of Hamas and other terror groups as "civilian."

What about B'Tselem, an Israeli group? How do they determine who is a terrorist and who is a civilian?

Clare Malone from FiveThirtyEight Politics has an interview with a B'Tselem spokesperson, Sarit Michaeli, and this question comes up. The answer is revealing as to how the world is getting fooled by "human rights" groups with an agenda:

CM: Palestinians could stand to gain sympathy if they lied about how many civilians are killed. Do you think witnesses ever try to obfuscate the type of person who was killed?

SM: I think it’s not unheard of. I don’t think it’s as big of an issue as the Israeli government would present it to be. For Palestinians, being involved in legitimate — in their minds — resistance against Israelis isn’t a thing to be ashamed of. They’re proud of it, and the fighters are certainly proud of it. There are also stipends and payments to Palestinians who were killed while resisting the Israeli occupation. (Again, I’m using intra-Palestinian language.) So there are also some conflicting interests, and I think for many Palestinians they would gladly admit that their relative who was killed was involved as a fighter.

That's it: the way B'Tselem determines if a dead Gaza is a civilian is by asking their families and assuming that they are telling the truth. 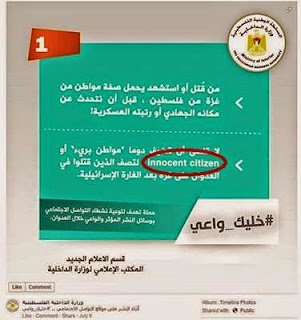 What B'Tselem completely ignores is that Hamas, though the Gaza Interior Ministry, has instructed Gazans to identify every dead person as an "innocent civilian."

Anyone killed or martyred is to be called a civilian from Gaza or Palestine, before we talk about his status in jihad or his military rank.Don't forget to always add 'innocent civilian' or 'innocent citizen' in your description of those killed in Israeli attacks on Gaza.

There are some terrorists who cannot be denied that status - if they are wearing uniforms, or they were killed in a terror tunnel or in a firefight. But many, many of the dead males between 16 and 40 are terrorists whose families will not admit to any NGO as to their status.

B'Tselem's assumption that families want to identify their relatives as terrorists to gain financial benefit is at best naive and at worst deceptive. The Hamas and PA governments won't determine a person's status as a "mujahid martyr" based on what the families tell NGOs, but on their claims to the governments and from the martyr's lists that will be published over the next several months - well after the propaganda advantages of lying today about hundreds of "civilians" have been pocketed.

B'Tselem is either knowingly lying to inflate the number of civilians to fulfill its anti-Israel agenda or they are willingly being duped to inflate those numbers. This interview proves that there is no real research being done by these NGOs to determine the truth.

And keep in mind that these NGOs are funded based on how bad they make Israel look. B'Tselem has zero incentive to try to debunk lies about civilians because the more dead civilians they identify, the more they get attention and European cash. Even if the group is entirely righteous and truly trying to do the best they can, which is highly doubtful, this subconscious bias would pollute their statistics. And no one is going to fund an independent, transparent audit of the methods NGOs use to count casualties.

The IDF's statistics, which show that about half of the Gazans killed in this current engagement are actually terrorists, are being dismissed out of hand as biased (also, the IDF isn't doing nearly enough to publicize them.) But historically the IDF statistics have been proven to be the correct ones - once the fog of war is lifted and the terror organizations start celebrating their "martyrs."

The faulty statistics from B'Tselem (and the much worse PCHR and Al Mezan) then get swallowed happily by the UN, whom the world media can feel righteous about quoting.

The truth is the real casualty.