Palestinian health officials: 20 people were killed when an UNRWA school in the Jabaliya refugee camp in the northern Gaza Strip was shelled by the IDF. 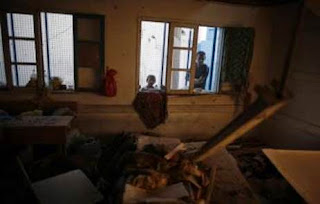 Palestinians look at a damaged classroom in a United Nation-run school Photo: REUTERS

The Israeli military, in an initial response to the killing of at least 19 Palestinians in a United Nations-run school in Gaza on Wednesday, said militants near the facility had fired mortar bombs and Israeli forces had shot back.

"Earlier this morning, militants fired mortar shells at (Israeli) soldiers from the vicinity of the UNRWA school in Jabaliya (refugee camp). In response, soldiers fired towards the origins of fire, and we're still reviewing the incident," a military spokeswoman said.

A UN official said 19 people in the school were killed when five Israeli tank shells hit it.

Palestinian health officials in the Gaza Strip reported early Wednesday that 20 people were killed when a school operated by UNRWA in the Jabaliya refugee camp in the northern Gaza Strip was shelled by the IDF, media reports indicated.

The school served as a humanitarian shelter for many displaced Palestinians in Gaza. The IDF has so far been unable to confirm the claim, and the matter is currently under investigation.

The incident came hours after UNRWA reported that for the third time in two weeks, it found that weapons had been stored in one of its Gaza schools.

It called a United Nations munition exporter to dispose of the rockets and make the school safe, according to its spokesman Chris Gunness.

Fighting in Gaza made it impossible for the munition experts to access the site, Gunness said.

He condemned those who put civilian lives at risk by placing the rockets in a school run by the UN Relief and Works Agency for Palestinian refugees whose facilities are neutral places that are not involved in the fighting.

UNRWA runs more than 200 schools in Gaza and this month its facilities have housed Gazans who fled their homes to escape the Israeli aerial attacks.

"We condemn the group or groups who endangered civilians by placing these munitions in our school. This is yet another flagrant violation of the neutrality of our premises. We call on all the warring parties to respect the inviolability of UN property," Gunness said in a statement.

But he did not name any groups in his statement nor did he hold Hamas accountable for the incident.

In the past, Israel has charged that terrorists in Gaza make use of UNRWA facilities. UNRWA has denied all such charges, and said until the two weeks ago, it had never found weapons in its buildings.

Now that it has discovered weapons in its facilities it has struggled with the question of how to dispose of them in the midst of a war in Gaza, which is ruled by Hamas.

Two weeks ago it handed 20 rockets found in one of its schools to the local authorities, a move which many of its critics believe was equivalent to giving them to Hamas.

Gunness said the representatives from the national consensus government who arrived to move the weapons had no connection to Hamas.

Last week, when UNRWA discovered weapons one of its facilities, it did not immediately report the find and before it could figure out what to do, the weapons disappeared.

UN Secretary-General Ban Ki-moon last week said he was outraged that rockets had been placed in UNRWA schools and that some of the weapons were now missing.

He ordered the implementation of new regulations regarding any such discoveries in the future that would include a method by which the UN would dispose of weapons found in their facilities.