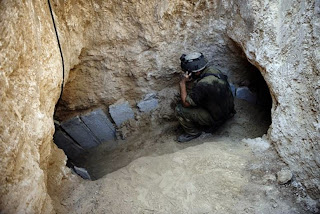 An Israeli soldier is seen at the entrance of a tunnel dug by Palestinians beneath the border between the Gaza Strip and Israel on October 13, 2013. ( DAVID BUIMOVITCH/AFP/Getty Images)

As the death toll of Operation Protective Edge rises, the deaths of children are firmly in the spotlight—and rightly so. It pains all reasonable people to hear of children dying as the consequence of war. Hamas and its supporters display gruesome pictures of dead and wounded children in order to gain sympathy for their portrait of Israel as the villain intent on killing Palestinians. In response, Israel cites the need to stop Hamas from firing thousands of rockets at its own children, who are being forced to live in bomb shelters, as well as the need to eliminate the tunnels that Hamas dug into Israel in order to carry out terror attacks against Israelis. One tunnel opening was found underneath an Israeli kindergarten.

But who built those tunnels? The answer is Hamas, of course—using some of the same children who are now trapped under fire in Gaza.

The Institute for Palestine Studies published a detailed report on Gaza’s Tunnel Phenomenon in the summer of 2012. It reported that tunnel construction in Gaza has resulted in a large number of child deaths.

“At least 160 children have been killed in the tunnels, according to Hamas officials”

The author, Nicolas Pelham, explains that Hamas uses child laborers to build their terror tunnels because, “much as in Victorian coal mines, they are prized for their nimble bodies”.

Human rights groups operating in Gaza raised concerns about child labor in the tunnels as far back as 2008. Hamas responded by saying it was “considering curbs.” Following Operation Cast Lead in 2009 Hamas softened its position and the Interior Ministry established the Tunnel Affairs Commission (TAC) which, “In response to public concern at a rising toll of tunnel casualties, particularly of child workers…issued guidelines intended to ensure safe working conditions.” No mention is made in the report of the conditions that would result for both Palestinian and Israeli children from building tunnels that would be used to launch terror attacks.

Nor does it seem that Hamas paid much subsequent attention to ensuring the safety of the child workers that it used to build the tunnels that would wind up endangering the lives of many in Gaza. On a tour of the tunnels in 2011, Pelham noted that, “nothing was done to impede the use of children in the tunnels.”

Not only are Hamas misappropriating much of the humanitarian aid supplied to Gaza—800,000 tons of cement were used to construct the terror tunnels into Israel—they are also directly exploiting and endangering Gaza’s youth in their construction and operation.

Previous: Inside the Hamas Tunnel Terror Network
Are Israel’s Attacks on Gaza Proportional?
Related: Some Concrete Facts About Hamas