Hamas threatening journalists in Gaza who expose abuse of civilians

Reporters are bullied, have equipment confiscated, barred from sensitive sites… but they don’t report it. ‘They’re too scared,’ says Israeli official, lamenting capitulation to harassment 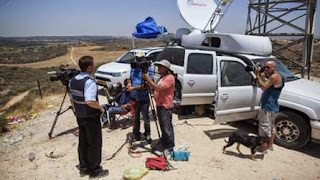 Several Western journalists currently working in Gaza have been harassed and threatened by Hamas for documenting cases of the terrorist group’s involvement of civilians in warfare against Israel, Israeli officials said, expressing outrage that some in the international media apparently allow themselves to be intimidated and do not report on such incidents.

The Times of Israel confirmed several incidents in which journalists were questioned and threatened. These included cases involving photographers who had taken pictures of Hamas operatives in compromising circumstances — gunmen preparing to shoot rockets from within civilian structures, and/or fighting in civilian clothing — and who were then approached by Hamas men, bullied and had their equipment taken away. Another case involving a French reporter was initially reported by the journalist involved, but the account was subsequently removed from the Internet.

Officials in Jerusalem said incidents like these underline Israel’s claim that Hamas doesn’t shy away from violence to control the flow of information out of Gaza and that the terrorist group intimidates and threatens journalists in the Strip who seek to report objectively about the conflict.

“We have no doubt that Hamas, through coercion and violence, limits the freedom of foreign journalists in Gaza,” an Israeli official told The Times of Israel. “Walking around Gaza with a camera and asking people what they think is not like walking around New York or London. People are not free to say their true opinions. It’s a bit like asking Syrians in government-controlled areas of Damascus if they like President [Bashar] Assad.”

Hamas has indisputably used violence against reporters who have covered stories it doesn’t like, the official said. And it has emphatically limited reporters’ access to aspects of Hamas operations that would reflect to its detriment. One example of this relates to Gaza’s Shifa hospital, the official added. “We know that downstairs there is a Hamas command and control center and that Hamas leaders are hiding there. No reporter is allowed to go anywhere downstairs. They’re only allowed to work upstairs to take pictures of casualties, the pictures that Hamas wants them to take.”

Shifa has indeed “become a de facto headquarters for Hamas leaders, who can be seen in the hallways and offices,” the Washington Postreported on July 15. The Wall Street Journal‘s Middle East correspondent, Nick Casey, wrote on Twitter that Hamas uses Shifa “as a safe place to see media,” but removed the post afterwards.

Last week, a correspondent for the local Ouest France daily newspaper told Libération, another French daily, about how he was interrogated and intimidated by Hamas officials in what appeared to be their office in Shifa.

“A few meters from the emergency room, where the injured from the bombings kept on coming in, in the outpatient ward, [the reporter] was received in ‘a small section of the hospital used as an office’ by a group of young combatants,’” the article read. “Surprisingly, they were all well-dressed, ‘in civilian clothing, with a gun under the shirt, and some had walkie-talkies.’” He was ordered to empty his pockets, to remove his shoes and belt, then was taken to a hospital room that appeared to serve the men as their command office, the reporter recalled.

The journalist, who has family living in Gaza, was then interrogated by one of the Hamas men. “Who are you? What’s your name? What are you doing?” The Hamas fighter also asked the journalist whether he spoke Hebrew or had any ties to the Palestinian Authority in Ramallah. “The young Hamas supporters insistently ask the question: ‘Are you a correspondent for Israel?’” he recalled in the article. The reporter asserted that he works for French and Algerian media only, but was eventually told to leave Gaza and stop working.

Reporters Without Borders, a group advocating press freedom and the freedom of information, last week published a lengthy article about the Gaza conflict, harshly criticizing Israel for various alleged offenses. It made no mention of Hamas harassment of foreign journalists in Gaza.