Videos show proof of weapons being fired from civilian spaces in the Gaza Strip. 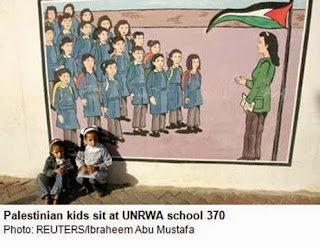 The first video shows several rockets being launched from a Gazan cemetery. In response to the video, the IDF said that Hamas continues to abuse public spaces in Gaza to launch rockets at Israel. "Hamas is responsible for all damage done to Gaza caused by return fire," the IDF Spokesman's Office wrote.

The second video shows three rockets being launched from the Abu Nur School in Gaza. The voices heard over the video say that it seemed that the rocket launchers were located inside the school itself. It is unclear whether or not the school is run by the United Nations.


On July 15, a cache of 20 rockets was discovered in a UN-run school, which was vacant at the time, during a routine inspection.

In the past, Israel has accused terrorists of putting weapons in schools, including United Nations Relief and Works Agency schools, which the organization has denied.

"This incident, which is the first of its kind in Gaza, endangered civilians, including staff, and put at risk UNRWA's vital mission to assist and protect refugees in Gaza," UNRWA spokesman Chris Gunness said.

Following the UN's investigation, there were rumors in Israeli media that the weapons had been returned to Hamas, which Gunness denied. He said the rockets were taken away by bomb disposal experts who are answerable to the national unity government, which Hamas has left.