Hamas killed 9 Arab children yesterday. No one seems upset at them.

The evidence that two Hamas rockets were wildly fired and killed at least ten people yesterday is overwhelming.

The first and best piece of evidence is that the IDF denied doing anything in that area to begin with. Usually they say they were targeting terrorists and it takes them many hours to even begin to release results of an investigation, but in this case they knew immediately that it wasn't them - because they weren't there.

In every case I can recall of that sort of categorical denial by the IDF, it always ended up being proven true.

Here is what the IDF investigation found. 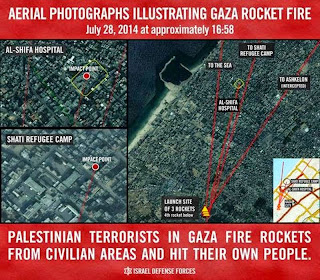 Presumably this came from the Iron Dome radar that calculates the trajectory of every rocket that is fired from Gaza in seconds. Given that one of the rockets headed for Ashkelon, and that terrorists shoot the same kinds of rockets in each volley, we can see that all of the rockets were probably Grad-types - Qassams don't reach Ashkelon.

The destruction we saw was consistent with a Grad rocket.

Other bits of evidence came in. A WSJ reporter tweeted (and then deleted) that the damage to the hospital was inconsistent with an airstrike. 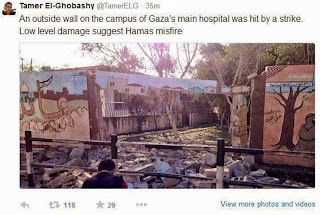 An early tweet that may have been deleted from a reporter said that he saw a "shallow crater" at the Shati camp, again inconsistent with an Israeli airstrike.

Hamas barred the media from the area as they presumably cleaned up any evidence of the rocket - something they have done in the past when there was a high-profile misfire that they want to blame on Israel.

Reporters in Gaza still give credence to Hamas claims as if the terror group that brags about targeting millions of civilians is trustworthy.

It is also worth noting that, yet again, "eyewitnesses" say they saw an airstrike and it was not. This has happened countless times but lazy reporters keep quoting "eyewitnesses" who have no idea of what they are saying (or that are lying, as often happens.)

The funny thing is that no one has ever protested about the children Hamas kills. UNRWA isn't protesting Hamas' disregard for the lives of the people they say they are prottecting.

No NGO is calling this a potential crime against humanity. Probably because they only accidentallykilled Gazan children while they were aiming at Israeli children, which isn't  problem at all for these hypocrites. The NGOs manage to read the minds of Israeli generals to determine intent, yet they ignore direct terrorist threats against civilians and policies designed to endanger their own people as not quite enough evidence.

A tweet from Italian journalist Gabriele Barbati tells the truth about the incident at Shati and Shifa yesterday, and it reveals even more than that:

This is more than an independent confirmation of what the IDF said.

It is more than a confirmation that the IDF tells the truth and that Hamas knowingly lies.

This is a scandal: Every single Gaza reporter who was there in Shati and Shifa are keeping their mouths shut.

Yesterday I wrote that every reporter got it wrong. I was too kind. Every reporter knowingly trampled on the truth.

If reporters being in Gaza only promotes Hamas propaganda and willfully ignores the truth, then what value is there to send "journalists" there to begin with? You might as well just translate the Hamas Ministry of Information webpage and call it a day. Because that is exactly what the reporting out of Gaza has been like.

Every single report on TV from Gaza should have this disclaimer:

"Our reporters have been threatened, implicitly and perhaps explicitly, by Hamas to only report one side of the story.Viewers must not trust anything they are saying."

There is an assumption of fairness in journalism, a contract between the media and the viewers. This contract has been broken, as far as I can tell, by nearly every single reporter in Gaza in nearly every report, with a couple of rare exceptions.

I understand that it isn't easy to report from a war zone. But when reporters are so willing to follow the dictates of the local government, and to allow themselves to be threatened without reporting that fact, then their reporting is nearly worthless, and they simply cannot be trusted.