Danish reporter Steffen Jensen visits Gaza to see how bad things are, given that the entire world is in an uproar over the humanitarian crisis there (translated):

http://elderofziyon.blogspot.com/2010/06/danish-report-from-gaza-wheres.html
Judging from the media, the situation in Gaza is desperate, everything is about to collapse, and the community is on the brink or at the level of a third world country.

The Palestinian community's immediate downfall has been prophesied numerous times in the media. People have nothing to eat, we sometimes know. The UN must from time to time to stop food distribution, either because their stocks are running low, or because they can not get diesel for their trucks, and therefore can not carry food in. And so on.

Yesterday I drove into the Gaza Strip. I don't do this as often as before [because it takes much longer to get through the checkpoints now.] 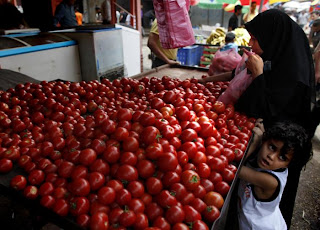 This time, I had expected to see real suffering, because with all the fuss in recent days about bringing tons of humanitarian relief in - so much that people actually sacrificed their lives for it - there certainly had to really be a deep, desperate situation in the Gaza Strip. No food. Long queues in front of UN food stocks. Hungry children with food bowls.

But this was not the picture that greeted me.

When I yesterday morning drove through Gaza City, I was immediately surprised that there are almost as many traffic jams as there always has been. Is there not a shortage of fuel? Apparently not. Gasoline is not even rationed.
Many shops were closed yesterday, Hamas has declared a general strike in protest against Israel's brutal and deadly attack on the Turkish flotilla with pro-Palestinian activists on board. So it was difficult to estimate how many products were on the shelves. Therefore I went over to the Shati refugee camp, also known as Beach Camp. Here is one of Gaza's many vegetable markets that sell much more than just fruits and vegetables.

I will not say whether, in better times has been a larger product range than there was yesterday. But there was certainly no shortage of vegetables, fruits or any other ordinary, basic foods. Tomatoes, cucumbers, corn, watermelons, potatoes - mountains of these items in the many stalls.

I must admit I was a little surprised. Because when I call down here to my Palestinian friends, they tell me about all the problems and deficiencies, so I expected that the crisis was a little more clear.

And the first woman we interviewed in the market confirms this strange, contradictory, negative mindset: 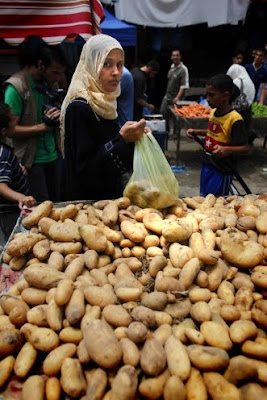 It disturbed her not at least that she stood between the mountains of vegetables, fruit, eggs, poultry and fish, while she spun this doomsday scenario.

Yousuf al-Assad Yazgy owns a fruit and vegetable outlet here in the market. All his fruit is imported from Israel.

"Not all fruit and all vegetables come from Israel. Ours does. They come from Israel. But in the Gaza Strip there is not very much fruit cultivated. Mostly tomatoes, potatoes and vegetables. So here with me are the vegetables and watermelon were from Gaza. All the fruit comes across the border from Israel," he explains, but also says that there can be long periods when the border is closed, and which therefore fruit does not come in.

On the way out of the Shati camp we stop at a small grocery store. Not any fancy, expensive business. Just a small, humble local store. The proprietor Sun Mohammed Abu Nada says they would not be able to do business if it were not for contraband goods from Egypt.

He takes us on a brief tour of the shelves and shows everything that comes from Egypt. It turns out to be much more than half of the goods. 75-80 per cent. I would estimate. Several other products - including long-life UHT milk - comes from Israel, but is also smuggled through tunnels from Egypt. 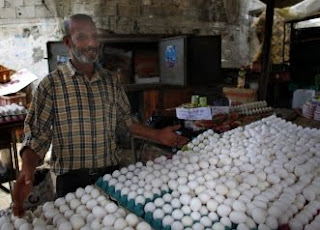 The products are more expensive, he says. Many people cannot afford to buy them, or only to buy certain things sometimes. But all the while that even such a small, poor-looking grocery store on the outskirts of a refugee camp still has so many relatively expensive smuggled goods on the shelves shows nevertheless that many of the customers at least be able to afford to buy them. Otherwise, the merchant of course could not even afford to invest in unsold inventory.

This story I have written to postulate that there are problems in the Gaza Strip, because that would be untrue. There are problems. Many problems indeed. But it is not lack of food, which primarily concern people down here. The biggest problem is the lack of jobs and a sustainable domestic economy.
Gepost door Ratna pm donderdag, juni 03, 2010