All this week, the media have been saying that the Flotilla of Fools aiming towards Gaza is bringing in some 10,000 tons of aid. For example, in Business Week:


The eight ships, organized by an international group called the Free Gaza Movement, are carrying about 10,000 tons of cargo, including cement for rebuilding homes destroyed by war in Gaza, medical equipment and school supplies.

Yet last week, the amount that the organizers publicized was 5000 tons. From the Palestine Chronicle" on May 21:


The ships are carrying 5,000 tons of construction materials, medical equipment, and school supplies, as well as around 600 people from 40 countries. "

From the Irish Times on May 19th:


The nine boats are due to arrive in Gaza next week with 5,000 tons of reconstruction material, medical equipment and school supplies.

That is a remarkable increase in cargo for the week.

It gets even weirder. Clearly, the heaviest part of the aid is the construction material, and according to the media reports and the Free Gaza folks, they are bringing in only 500 tons of cement. So are they bringing in 9,500 tons of paper, schoolbooks and medical supplies? There are some six tons of paper from Norway, so that can't be it.

Even if they are bringing in prefabricated houses, as some reports say, prefab houses weigh only about 1.5 tons each- and I didn't see any pictures of thousands of houses on the ships that would be needed to fill out 10,000 tons.

Is it possible that they are lying?

It is more than possible - it is a guarantee.

In February, 2009, the Free Gaza people claimed that the ship that was trying to reach Gaza was filled with 60 tons of aid. When the Israelis looked inside the ship, they found it was practically empty:


The IDF said that troops found about 150 bottles of mineral water and a few dozen kilograms of food and medicine on board, despite earlier claims that it was carrying about 60 tons of medicine, food and toys, plus 10,000 units of human blood plasma which requires constant refrigeration. 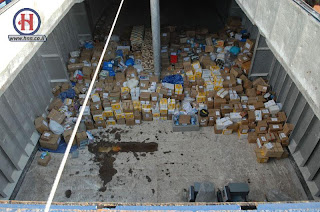 These folks have no qualms about lying about their cargo, as they have done it in the past - exaggerating their supposed aid by a factor of at least 50.

In other words, you cannot believe a word that these people say, even when it seems to be innocent background material. The media especially should be wary about reporting back on anything that they are told by the Flotilla Fools.

Practically everything that comes out of their mouths is an easily provable lie.
Gepost door Ratna pm zondag, mei 30, 2010