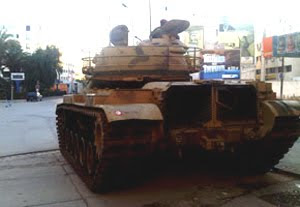 Tunisia: The day after

It was extremely calm, almost serene in Tunis this morning. It was hard to believe that only yesterday, thousands marched in the same streets calling for an end to President Zine al-Abidin Ben Ali's rule, and got their wish.

We walked from the hotel to the centre of town, passing through Habib Bourguiba avenue – the sight of yesterday's protest in front of the Ministry of Interior – to reach the office of Amnesty International in Tunis.

If not for the sight of tanks and soldiers patrolling the streets, the absence of daily papers, and some broken glass and rocks on the pavement, it would have just seemed like an exceptionally quiet morning in a normally busy capital.

The calm did not last long, especially when news emerged that across the country Tunisians protested in the streets last night, despite the curfew and the licence to "shoot on sight" granted to security and military forces.

They were calling for the resignation of Mohammed Ghannouchi, who just assumed power as President some hours earlier. Protestors considered the move unconstitutional and leaving the door open to the potential return of Ben Ali.

He had in the meantime found refuge in Saudi Arabia after being rejected by arguably his strongest ally in Europe, France, no doubt mindful of further damage to its image due to its close association with the toppled president.

Tunisians are still angry with President Sarkozy's statement when he visited Tunisia on the growing space for freedom in the country, when they were suffocated by repression.

Again, the power of the Tunisian street was overwhelming yesterday. Before noon, an official announcement was made that the Speaker of Parliament was provisionally assuming presidential powers, until elections are held in 60 days.

Tunisians who had the same president for 23 years had three presidents in 24 hours.

Almost immediately after the announcement, we heard shots outside of Amnesty International office's window facing the main train station in Tunis.

We saw riot police heading in the direction of the Habib Bourguiba avenue, and got a call from a contact advising us to leave the centre of town for security reasons.

Walking to the Palais de Justice, the main court building in Tunis, to meet lawyers who just held an extraordinary meeting to respond to the unfolding events, we could see that the city was no longer serene.

We walked by scenes of police searching and roughing up a youth in the street and several others being made to kneel on the pavement before a police truck.

Despite the tension, the atmosphere in front of the court building was jubilant. Human rights lawyers, some of them former prisoners of conscience, were debating the future of the country.

Lawyers have been at the forefront of the struggle for human rights in the country and some paid a high price for their activism. One told us that despite his overwhelming relief concerning the end of Ben Ali's rule, he feared anarchy.

Indeed, Tunis along with many other cities in Tunisia has witnessed gangs of unidentified men attacking, looting and vandalizing public buildings as well as private residences.

All our interlocutors, from all political backgrounds, from the left to Islamists, placed the blame on elements within Ben Ali's circle. They argued that his supporters, mainly within the security sector, were seeking to show Tunisians and the world that in the absence of Ben Ali, Tunisia risks becoming a failing state, void of law and order.

Members of a Tunisian human rights NGO took us to Ariana, a suburb of Tunis, to show us the aftermath of the destruction. We saw three police stations and several supermarkets full of nothing more than some debris. Smoke was still coming out of one of the police stations vandalized and burned during the night.

We were also confronted with a different sight – youth armed with sticks, metal batons, chains and swords patrolling the streets against more potential attacks all around what our guides described as "a working class neighbourhood".

One scene, outside the main police station in Ariana, was particularly striking. Youth and boys carrying wooden sticks, some of them looking as young as 10 years old, were standing side by side with military and police and were, unlike me, undisturbed by the sight of machine guns and revolvers.

Back in the hotel in time for the 5pm curfew, we barely had time to digest the events of the day, when we heard shots being fired. They lasted intermittently for some two hours, until the city became silent again – though there is a persistent sound of helicopters circling above.

Tunisia's political future remains uncertain. In the meantime, the current government must do its utmost to protect Tunisians from further violence – regardless of who is behind it – and ensure that in doing so it only uses proportionate force, when strictly necessary to protect lives.

It must also reign in the security forces and overhaul both the security apparatus and the justice system, the two arms of repression in Tunisia. Maybe then, Tunisians will trust that a page in their history of rule by force and repression has been turned.