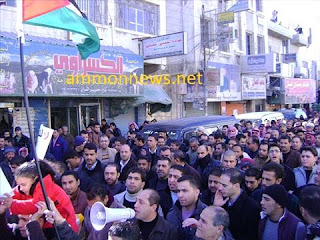 AMMAN, Jordan -- Thousands of Jordanians calling for their government to step down marched in several cities Friday in an outpouring of anger over economic hardship and a lack of democratic reforms in the constitutional monarchy.

Spurred on by the example of the popular uprising in Tunisia, Jordanians have staged growing protests in the past week. The opposition movements that organized Friday's demonstrations vowed to keep up the pressure until Prime Minister Samir Rifai and his government resign.

Wary of the outcry, particularly over rising prices, Jordan's government has taken some steps to try to defuse the situation, including by announcing $125 million in subsidies on basic goods and fuel. The prime minister also announced a surprise pay increase for civil servants.

Protesters scoffed at the measures.

"They lie to the people. They reduce some things and increase others more," said Muslim Brotherhood demonstrator Suhair Asaaf, an electrical mechanic.

He was among more than 5,000 people demonstrating Friday in the capital, Amman, its suburb Zarqa and in the northern town of Irbid. The organizers of what was dubbed a "Day of Rage" represented a broad swath of Jordan's opposition, including the powerful Muslim Brotherhood, left-wing groups and trade unions.

Crowds chanted: "The Jordanian people are on fire. The government is cutting its people like a saw. Down, down Rifai."

The opposition groups are calling for reforms to allow Jordanians to elect their prime minister and the rest of the Cabinet rather than having them appointed by King Abdullah II.

Elections are held for Jordan's lower house of parliament as well as municipal councils and mayors.

Abdullah, a key U.S. ally, ascended to the throne in 1999 vowing to transform his desert Arab kingdom into a model democracy in the Muslim world. But his reforms have been slow, as Jordan tries to limit Islamist influence.

Hamza Mansour, the head of the Islamic Action Front, the political arm of the Muslim Brotherhood, Jordan's largest opposition group, urged the king to make all branches of power independent.

"The king should be the guide, not the executor of the country's daily affairs," he said during the march.

"This whole system of government must change. And we'll continue the protests until that happens," he said.