Here is a poster by the artistic Elder of Ziyon. Is he being fair to Mr. Abbas? 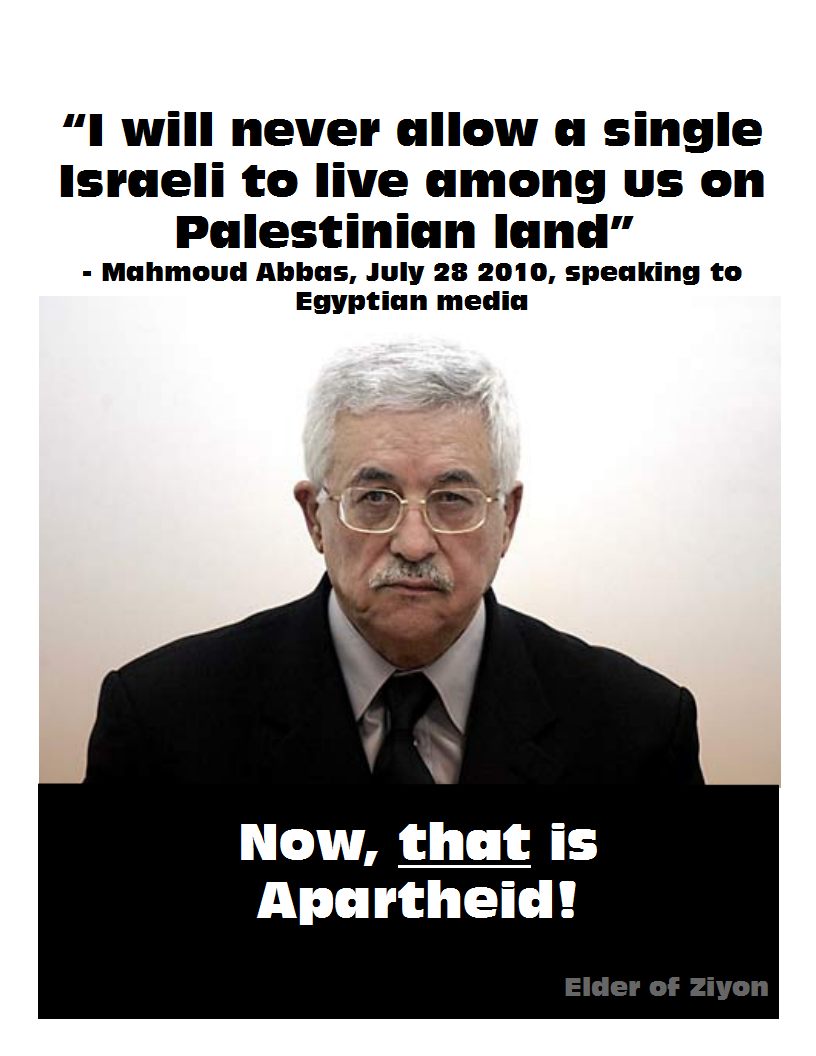 I conducted a Socratic thought-interview to find out. Everything Mahmoud Abbas says below reflects a position he has taken recently.

FresnoZionism: Hello, Dr. Abbas. Thank you for agreeing to this fictitious interview.

Mahmoud Abbas: You're welcome. Anything to advance the cause of peace.

FZ: Mr. Abbas, why won't you allow Israelis to live in 'Palestine'?

MA: Obviously because Palestine is the nation-state of the Palestinian People. That means that only Palestinians can live there.

FZ: So is Israel the nation-state of the Jewish People?

MA: No, there is no Jewish people, only a Jewish religion.

FZ: But if there were a state belonging to the Jewish People, then Palestinians couldn't live there?

MA: There can't be, because there isn't a Jewish people.

FZ: But Israel today considers itself a Jewish state. And yet it allows Arabs to live there, and even vote…

MA: It's not my job to say what Israel is. But those Arabs that you mention are Palestinians, and of course they can live there. It's their land.

FZ: So what will happen if there is peace?

MA: The Israelis living in Palestine will have to leave, for one thing.

FZ: What if there is an Arab citizen of Israel living in Ramallah, for example. He's an Israeli. Will he have to leave too?

MA: No, of course not. He is an Arab Palestinian.

FZ: So what you really meant to say in the quotation on the poster is that Jews will not be allowed to live in Palestine?

FZ: What else will happen if there is peace?

MA: All the Palestinians in the world will have the right to return to their homes, in Haifa, Acco, Yafo, wherever.

FZ: Even if they never set foot in those places?

MA: Of course. If they are a member of the Palestinian People, they have a right to live in Palestine.

FZ: What makes them members of a people, if they've never lived in Palestine?

MA: It's enough to have a Palestinian father.

FZ: So why isn't someone with a Jewish mother a member of the Jewish people?

MA: I told you: there isn't a Jewish people, only a religion.

FZ: When did the Palestinian people first come to Palestine?

MA: They've always been there.

FZ: What about the Egyptians that moved to the region in the 1830′s? Or the Arabs that immigrated during the Mandate period, because of the improved economy created by the Zionists? Or the Syrian Arabs who came from the Hauran region during the drought of 1932-34?

MA: If they lived in Palestine and were Arabs, then they are Palestinians.

FZ: Hmm… if a dog is yours and the dog is a mother, is it your mother? And are your brothers puppies?

FZ: Never mind, it's an in-joke for philosophy students (quiz: in what dialogue of Plato is this found?). So can Jews be Palestinians?

MA: Of course not!

FZ: But during the mandate period and before, Jews living here were called 'Palestinians'. And nobody talked about a Palestinian People until about 1967. Before that, they were Palestinian Arabs, just like the Palestinian Jews.

MA: Only Arabs are Palestinians. Jews are European colonialists squatting on Arab land.

FZ: But about half the Jews in Israel didn't come from Europe. They were kicked out of Arab countries. Take the Syrian Jews, for example…

MA: Well, they are colonialists, too. If they're Jews, that is.

FZ: So Syrian Arabs can be Palestinians and a member of a people, but Syrian Jews cannot?

MA: It wasn't a war of independence, it was a nakba. The Jewish refugees mostly went to the Zionist entity. The Arab refugees still live in horrible camps.

FZ: And why is that? OK, never mind. Let's get back on track. When there is peace, the Jewish settlers will have to leave 'Palestine'. What about the Arab settlers in Israel, like those in the settlement of Umm-El-Faham? Will they have to leave?

MA: No, of course not. They are Palestinians and have the right to live anywhere in Palestine, even in the Zionist entity.

FZ: So, we have 'Palestine' where there are no Jews allowed, and Israel where both Jews and Arabs can live. But Israel will not be a Jewish state, because there isn't a Jewish people. Anyway, all 4-5 million Arabs who claim refugee status will have a right to 'return to their homes' in Israel, giving it an Arab majority. Isn't that a little, er, unfair?

MA: Unfair? Of course not! It's a two-state solution.