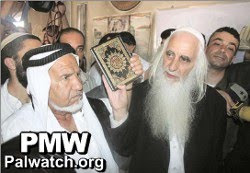 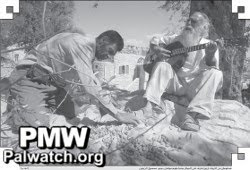 by Itamar Marcus and Nan Jacques Zilberdik
Last week a fire was set to carpets and copies of the Quran inside a mosque near Bethlehem. In a positive move, the PA official daily Al-Hayat Al-Jadida gave prominent first page coverage to the solidarity visit of Israeli "settler rabbis" and "dozens of settler-supporters of peace" who came to the mosque to express condemnation of the arson. The PA daily published a picture of the visit and reported that the rabbis brought new copies of the Quran to replace the burned copies.

In another positive note, two days later the same PA daily showed a picture of Israeli - Palestinian coexistence by publishing a picture of a Palestinian harvesting his olives to the accompaniment of an Israeli sitting right next to him under the tree playing his guitar.

The caption to the picture was:

"Settler from Kiryat Arba plays his guitar while a [Palestinian] resident gathers the olive harvest."
[Al-Hayat Al-Jadida, Oct. 8, 2010]
The following are texts from two articles in the official PA daily giving prominence to the rabbis' visit:
"Six settler rabbis conducted a solidarity visit to the village of Beit Fajar, near Bethlehem, bringing with them copies of the Quran. Dozens of settler-supporters of peace and hundreds of Palestinians, expressing solidarity, gathered to receive them at the entrance of the village. After handing over a box containing 20 copies of the Quran, to replace those which had been burned in the mosque, Rabbi Menahem Fruman said: 'This land is the land of peace, and Allah will take revenge on those who set fire to the mosque.'"
[Al-Hayat Al-Jadida, Oct. 6, 2010]
"Yesterday, a delegation of Jewish religious leaders visited the town of Beit Fajar and examined the destruction caused by the fire two days ago. They emphasized that the Jewish religion is innocent of the perpetrators.
The delegation included Fruman, rabbi of the settlement of Tekoa - a settlement which is situated on the land of the Taqoa village and in which settlement construction work is continuing, as well as Rabi Aharon Lichtenstein and Rabbi Alex [sic - should be Shlomo] Riskin.
Bethlehem District Governor, Abd Al-Fatah Hamail, received the delegation inside the mosque, and said that the Palestinian side appreciates the visit, but wants real actions that will help towards the capture of the criminals who carried out [the vandalism]. He described the fire in the mosque as a cheap act, far removed from human moral values, and reflecting the degree of hatred and animosity of the perpetrators, who represent a great threat to both Palestinians and Israelis...
Hamail said that the Palestinian people desires a just peace... and emphasized that the three [monotheistic] religions are tolerant religions, far removed from fanaticism and hatred, since all of them have explicitly established freedom of religion and the need for mutual respect.
Hamail called upon the Israeli side to investigate the circumstances of this action, and questioned whether the Israeli security [forces] have really been unable so far to discover the perpetrators.
The delegation of rabbis emphasized that the aim of their visit to the town of Beit Fajar was to express solidarity with the residents and with the Muslims of Palestine. They said that those who had carried out the action are singularly far removed from the Jewish religion, and announced that the expression, "Allah is great" is an expression that belongs to all three [monotheistic] religions, since God is greater than all such actions. They emphasized that they seek peace and justice.
They expressed the hope that peace will be attained in the Holy Land, because the monotheistic religions are based on coexistence and peace."
[Al-Hayat Al-Jadida, Oct. 6, 2010]