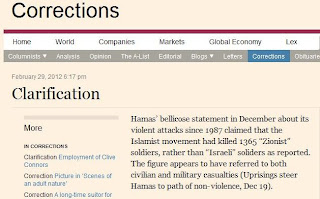 Back in December 2011, the Financial Times refused to correct an error during an email exchange with HonestReporting. Covering the 24th anniversary “celebrations” of Hamas, the paper reported Hamas boasts of killing 1365 “Zionist soldiers” taking the statement to mean “Israeli soldiers”.

Despite the fact that other media and Hamas itself understood the figure to include Israeli civilians and military personnel alike, the FT simply refused to acknowledge this despite HR providing the FT with crystal-clear statistical evidence to back this up.

The FT told us that “we don’t feel a correction is warranted” and “Hamas was clearly not talking about civilians.”

While we usually encourage our subscribers to take action, in this case, as the issue had arisen as a result of a direct exchange between HR and the FT, we decided, on a matter of principle, to take matters further. Both on behalf of the victims of Hamas terror and to see for ourselves whether the official channels of complaint would actually work against a UK media outlet, we submitted a formal complaint to the UK’s Press Complaints Commission (PCC) made in the name of an individual (HR Managing Editor Simon Plosker) rather than an organization.

Some two months later, here is the result (registration required) (also on Page 12 of the FT’s Mideast print edition of February 29):

But what did it take just to get this simple correction?

January 5, 2012: Simon Plosker submits a complaint to the PCC, which the FT responds by saying: “In summary we think the complaint, which we note originates in effect from a campaigning organisation, is misconceived and without merit.“

·        January 18: The FT offers to publish a clarification that Hamas was referring to “Zionist” soldiers rather than “Israeli” soldiers. There is no mention of clarifying the real issue – that of the word “soldiers” being used to describe all Israelis. The FT also offers to “consider” publishing a letter on the issue.

·        Plosker responds by suggesting that simply adding a few extra words to the FT’s proposed clarification could settle the matter: “Hamas’ bellicose statement last month about its violent attacks since 1987 claimed that the Islamist movement had killed 1365 “Zionist” soldiers, in reference to the total number of Israeli victims, both military and civilian.”

·        The FT rejects both the wording of the clarification and the letter submitted by Plosker.

·        Feb.28: The FT, as a result of the PCC’s intervention, reluctantly agrees to publish the clarification that eventually appeared in the paper, which Plosker accepted.

In the final outcome, the clarification is the bare minimum that was necessary to bring closure to this case. So why then did the FT behave in this manner and put up so much resistance to publishing what was, in reality, a very simple correction?

Could it be that the original offending article appeared only in the paper’s Middle East print edition (as well as online)? Was the FT afraid of offending its Arab readership, some of which may not consider Hamas to be a terrorist organization?

Did the FT not wish to back down in the face of a complaint made by the head of a pro-Israel media watchdog? This, despite the fact that the complaint itself was made in the name of an individual.

While the FT’s final clarification doesn’t tick all the boxes, nonetheless, this is a successful conclusion. The FT was held accountable to the extent that the paper’s Senior Legal Counsel was forced to defend the FT when the PCC became involved.

It also showed how just one single complaint made by an individual can get results if one is prepared to persevere and not give up. After all, it took many email exchanges overseen by the PCC, before the FT was even prepared to address the main thrust of our complaint.

This was also an opportunity for us, at HonestReporting, to test the Press Complaints Commission and to judge its effectiveness. That this case had to be mediated by the PCC in the first place is an indictment of the FT’s stubbornness, bad faith and a disturbing unwillingness to hold itself to journalistic standards even when presented with an overwhelming body of evidence.

In the end, it is down to supporters of Israel and advocates for a fair and balanced press to use those tools that can hold the media to account. It may be a letter to the editor or to a media ombudsman or even to an official body such as the PCC.

It’s all very well reading HR communiques and alerts. But it still requires individuals to take the appropriate action. So remember – one person may not make a difference, but thousands together can.