An Israeli Arab defends her country in South Africa 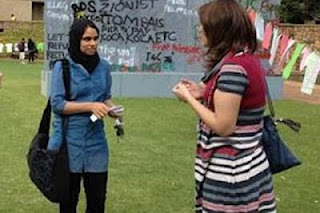 Israel has sent a delegation of 100 students to represent it in the annual Apartheid Week in South Africa, an Israeli newspaper reported Tuesday.

The report in Maariv noted one unusual participant in this year's delegation -- a 25-year-old Muslim Bushra Khalilieh, a member of Israel's Arab minority in the Galilee.

The newspaper said Khalilieh was attending university in one of South Africa’s university campuses. Khalilieh, who wears a hijab, came to Israel's defense during activities on campus.

"We toured Johannesburg and Cape Town’s campuses and met local students," she said.

"We spoke with them about Israel and I told them about my personal issue as an Arab girl living in Israel. I feel Israel to be my hometown where there’s equality and I have all my rights.”

"When students hear us, they are surprised as there are some who do not even know there are Arabs living in Israel. I, as an Arab Israeli girl, love my country and believe that it seeks peace and respects all its citizens.”

Khalilieh, a masters student at Tel Aviv University, stressed that she represents herself and not the position of the Israeli government.

“I represent myself as a Muslim Arab who lives in Israel as a liberal and free girl unlike other Arab girls who live in Arab countries and do not have the human rights I have like freedom of expression and dignity.”

She added: "There are people who are calling to boycott us and say that there is apartheid in Israel, but I try to show Israel as a country that’s different from what they think."

A number of Arab sites have picked up on the story, most highlighting the fact that she defines herself as an Arab Israeli - and not a "Palestinian."

Bethlehem - Ma'an - Israel sent a student delegation consists of 100 students to represent them in a week apartheid "apartheid" in South Africa, which is attended by students from around the world calling for an end to the Israeli occupation of the West Bank and lift the siege on the Gaza Strip.

So far, the news extraordinary and unusual, curious what it considered the Israeli press and in particular the Maariv daily Hebrew newspapers on Tuesday, weapon, Israel's secret face of criticism and represented a girl Palestinian Muslim at the age of 25 years, born in the village of Deir Hanna in Galilee and now lives with homes of students in the neighborhood of French Hill City of Jerusalem called "Bushra Halilih."

According to the newspaper defended Halilih good news that appeared on the campus of one of the South African universities wearing Islamic headscarf with great passion and eagerness for the right of Israel and its legitimacy.

She said Halilih saying "wander the campus of the University in Johannesburg, Cape Town and meet students, local and talk to them about Israel and show in front of them posted via the corner profile of me as a girl an Arab living in Israel, and I feel that Israel is a national where I live in full equality and get all my rights."

Halilih added: "When students hear and feel Balandhash there never had heard of the existence of Arabs living in Israel and the Arab-Israeli girl I love my country and believe that it is seeking for peace and respect for all its citizens."

Bushra Halilih at Tel Aviv University in the Masters Program Consulting regulatory and stresses that they represent themselves within the Israeli delegation, not the government's position, saying, "I represent myself Kaarbeh Muslim living in the State of Israel as a girl for liberal and free unlike girls Arabiyat other women living in Arab countries do not enjoy double the basic human rights such as dignity and freedom of expression. "

Faced Halilih and a group of students the Israelis what they called hostile and clear to Israel he showed students are supporters of the Palestinians as they encountered other supporters of Israel, "there are those who claim to our province and say that there are in Israel, Apartheid and I try to show Israel as completely different than they think," said Bushra.