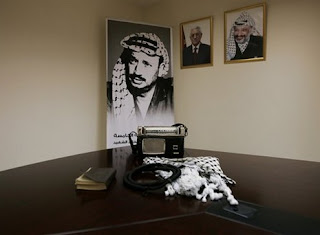 Kaffiyeh, radio, Koran to be displayed at Arafat museum

Photo Gallery: Construction of $3.4 million museum started two months ago. New building connects to Arafat's old headquarters in Ramallah. Yasser Arafat had a knack for turning ordinary objects into symbols, including the black-and-white checkered headdress that came to represent the Palestinian quest for a homeland.

Six years after his death, the keepers of Arafat's memory are gathering thousands of objects — photographs, pistols, the trademark sunglasses and military-style suits he favored — for display in a museum under construction at his former West Bank headquarters, where Arafat spent the last three years of his life encircled by Israeli forces.

The Associated Press was given exclusive access to part of the collection, including the last kaffiyeh Arafat wore before being helicoptered out of his Ramallah compound two weeks before his death on Nov. 11, 2004. There was a transistor radio and a Muslim holy book, both said to have been left at a house where Arafat stayed during a secret foray into the West Bank during the Six Days War in 1967.

In his four decades as Palestinian leader, Arafat was a complex and often divisive figure — branded by some as an arch-terrorist and celebrated by others as the father of the Palestinian national movement.

The museum pieces, along with the recollections of bodyguard Emad Abu Zaki, affirm Arafat's image as frugal man who didn't spend much on himself, even though he controlled large sums of money, and he and his associates were accused of corruption.

The kaffiyeh Arafat wore during those final days is still streaked with yellow stains and has not been washed, said Tami Rafidi, a curator at the Yasser Arafat Foundation. "We decided to keep it this way," said Rafidi. "It represents the last days before he left."

The transistor radio and Quran were donated by 86-year-old Fayez Mohammed, who sheltered Arafat at his sister's home in the village of al-Auja during the Six Day War in 1967. The six days of fighting ended with the Israeli capture of the West Bank, Gaza and half of Jerusalem, the territories the Palestinians want for their future state.

Mohammed said Arafat knocked on his door one night, along with two other Palestinian fighters, both in civilian dress. Arafat — who was still relatively unknown — introduced himself as "Abu Ammar," a nom de guerre, and Mohammed said he didn't immediately know his guest's true identity.

Arafat stayed for two days before withdrawing as Israeli forces closed in, leaving behind the radio and Quran. Mohammed said he kept the radio hidden for years — Arafat's name was scratched inside the battery box and he feared Israeli retribution for sheltering the guerrilla leader.

Collecting and cataloging Arafat's belongings has been a slow process, in part because they are scattered across the Arab world, including in the Palestine Liberation Organization leader's shifting bases of operations in the 1970s and 1980s — Jordan, Lebanon and Tunisia. Most have yet to be delivered to Ramallah, said Nasser al-Qidwa, an Arafat nephew overseeing the work.

The Gaza Strip, where Arafat set up his self-rule government after returning from exile in 1994, is a treasure trove of Arafat memorabilia. However, curators said they have had no success in getting the Islamic militant Hamas, which seized Gaza from Arafat's successor Mahmoud Abbas in 2007, to hand over the pieces, including the 1994 Nobel Peace Prize that Arafat shared with Israeli leaders Yitzhak Rabin and Shimon Peres.

Construction of the $3.4 million museum started two months ago and it is to open within a year. The new building connects to a wing of the headquarters where Arafat was isolated in his final years. The wing has been kept sealed, though photos of Arafat's spartan bedroom were posted last year on the foundation's website.

"Arafat wasn't better than those in charge today because he brought us all those thieves of PLO," Sobeh said. "But despite all that, I love Arafat because he died while he was resisting" Israel and the United States.