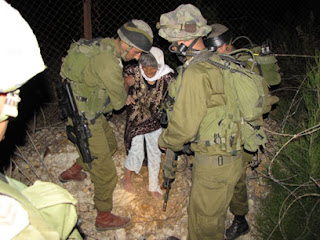 Troops patrolling northern border detect elderly woman tangled in barbed wire fence on Lebanese side near mine field, safely return her to Lebanon in coordination with UNIFIL forces

An IDF force patrolling along the northern border Saturday detected an 80-year-old woman whose clothes had tangled in the Lebanese side of the border fence. The troops informed United Nations personnel stationed at the area and rescued the woman together.

The elderly woman was caught in a part of the fence which was adjacent to a mine field and when it became clear the Lebanese Army could not assist her, the IDF stepped in.

A joint military force pulled the woman into Israeli territory while the Lebanese Army observed the rescue operation. After making sure the woman was not injured UNIFIL representatives contacted the Lebanese Army and coordinated her return to Lebanon via the Rosh Hanikra crossing.

An IDF source told Ynet the woman posed no security risk and was in evident distress. "As a humanitarian measure it was decided to help her and return her safely to her village in Lebanon," he said.

"The woman's rescue was performed by a joint force of engineering, scouts and Golani troops who are intimately familiar with the area and who managed to release the woman from the fence and transfer her to the Israeli side safe and sound."