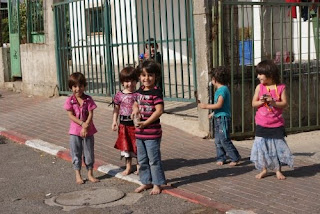 Ghajar: where the world sits on the fence.

November 11, 2010 in Uncategorized | by Israelinurse

The tinder-dry yellowed thistles alongside the neglected military road leading to Ghajar are not the only thing which could ignite any minute in that region. Tempers too are riding high. As I leaned against one of the concrete road blocks outside the village, waiting for permission from the IDF to enter and admiring the houses painted in sorbet shades of pinks, blues, yellows and greens, a minibus pulled up beside me and the window opened.

"Do me a favour." said the driver, a resident of Ghajar, "Write that it's humiliating, degrading."

"We can't go on like this" he continued, complaining about the lack of services and public transport, the fact that roads are not mended anymore and the resulting damage to his vehicle.

"But nobody in the world is interested in us."

I asked him what his status would be if the northerly part of Ghajar and its residents – who are Israeli citizens – is given over to Lebanon as demanded both by that country and the international community. He shrugged his shoulders and having no answer to that question for himself, let alone me, drove off.

Anyone who is not a resident of Ghajar cannot normally enter the village, which lies on a volatile border and has in the past been the site of kidnapping attempts by Hizbollah. The entrance to the village is heavily guarded and road-blocked and the once thriving domestic tourist industry died with the Israeli withdrawal from Lebanon in May 2000. I last visited Ghajar around fifteen years ago when a now extinct local restaurant serving delicious authentic Alawi cuisine against the backdrop of a marvellous view over the Hatzbani river was an attraction for day-trippers to the area.

Najib Khatib, the spokesman for Ghajar's local council, was unable to hide his discontent at the fact that no official representative has visited the village to ask what the 2,200 residents want or inform them of decisions which will affect their future.

"We only find out what is going on by way of the media" he said.

Since Israel withdrew from Lebanon, the residents have consistently opposed the division of the village as stipulated by the UN. Najib explained that there are not two halves to the village; it is one community and every resident of it has family members in both the artificially created parts.

"Why put up another Berlin Wall here?"  he asked rhetorically, and indeed when one sees where the proposed border would lie, one understands the full absurdity of the UN stipulation.

Most of the agricultural land belonging to the village is situated in the southerly area which means that should the division plan go ahead, the people living today in the northerly part would, according to Najib, find themselves stateless refugees in Lebanon and bereft of their lands. He calls it a "Judgement of Solomon": a demand to divide something which cannot be divided.

Najib then explained that the village never had any connections with Lebanon, from which it is separated by the natural border of the River Hatzbani. All the old deeds they have for their lands are Syrian and were issued in the Golan Heights town of Kuneitra. The UN mapmakers who drew up the border or "Blue Line" in 2000 relied upon old maps from 1923 created as a result of the Sykes-Picot agreement. As he wryly pointed out, "Those maps were made by the British and the French. There were no Israelis, Lebanese or Syrians then."

According to Najib, the entire village speaks with one voice on this issue and their position is that they are part of the Golan which was captured by Israel in 1967 and as such, their fate is inextricably linked to that of the Golan as a whole. If a peace agreement is ever signed between Israel and Syria under which the former gives over the Golan, then Ghajar should go back to being a part of Syria. Until then, they wish to remain as they are today: one united village in Israel, with Israeli citizenship.

I asked Najib if anyone from the UN had been to the village to actually see what the implementation of the "Blue Line" entails or talk to the people there. His frustration was evident.

When asked how a decade of ambiguous status has affected the village, he answered

"Life in the village is not good"

It is impossible to get services in the northerly part of the village; ambulances cannot enter and technicians cannot come to the houses to repair a broken fridge or air conditioner. No building permits are given and no compensation was provided for damages caused during the second Lebanon war in 2006 because officially Israel is not supposed to operate there.

On the other hand, the residents of the northerly portion of Ghajar are still Israeli citizens and therefore pay income tax, are required to purchase a television license and vote in Israeli elections. All of the village's main services such as educational establishments, the mosque and cemetery are located in the southerly part, which means that should the Israeli withdrawal be implemented and UNIFIL soldiers brought in as proposed, 650 school pupils will have to cross a problematic international border to get to school each morning.

According to Najib, the tension of living with uncertainty for over a decade has taken a particular toll on the children, with some of them displaying signs of stress whenever they see UN soldiers because of the implications of their presence.

Later, wandering around the twisty village streets perfumed with the scent of wood smoke, I popped into a corner shop to buy water.

"You're making a big mess for us" said the shopkeeper, referring to Israel's recent announcement that it will withdraw from Ghajar. I could not help but understand his point of view. In trying to comply with the demands of the UN, Israel has put some of its citizens in an impossible position. Yet even if the UN and Lebanese demands are met, there is little chance that, as claimed by some, this will cause Hizbollah to beat swords into ploughshares. In order to chase that illusion, the international community is prepared to create 1,200 new refugees entirely unnecessarily and to send them to an unsure fate in a country on the brink of yet another civil war.

Sadly, none of the dozens of Human Rights organisations operating in Israel, either local or international, has seen fit to take up the cause of the residents of Ghajar in the past decade. Israel's famously vocal Left is silent on this issue too and the international body responsible for the care of refugees, the UNHRC, apparently does not subscribe to the belief that prevention is better than cure.

As I left Ghajar I hitched a ride with another of its residents who raises beef cattle on the surrounding land. He spoke of the sense of a lack of future among the young people and of the emotional toll of ten years of threat and instability; in particular of the difficulties of their destiny being in the hands of others.

Ghajar's "Blue Line" is not just about borders and maps. It is first and foremost a human rights issue, but one on which the international community has been sitting on the fence for ten years. They may not be many and they may not have much of a voice, but surely the villagers of Ghajar deserve to be released from that prison.