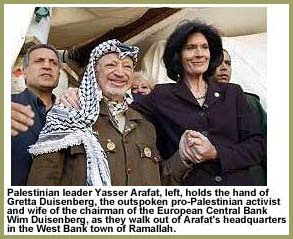 H/T Yochanan Visser, of the organization, Missing Peace, for the Dutch translation.

Phyllis Chesler tells us of the typically outrageous lies and doublespeak of the antisemitic Israel-hater, Gretta Duisenberg.  Duisenberg is the widow of Wim Duisenberg, the former President of the European Bank, the darling of Yasser Arafat and of the Free Gaza Movement, and chairwoman of a pro-Palestine committee "Stop the Occupation".   Prof Chesler tells us that Duisenberg, in an act which almost beggars belief, has proceeded to sue the Iranian-Dutch professor of philosophy and jurisprudence, Afshin Ellian, for calling her an "anti-Semite." Duisenberg seems to have forgotten that she proudly defines herself as an "anti-Semite."

In response to an article by Leon de Winter writing in Dutch in Elsevier, Abigail Esman writes:

"I invite all readers to support journalistic freedom and freedom of expression by writing 'I, too, think Gretta Duisenberg is an anti-Semite.'"

I would not expect any reader to accept that statement purely on my say so.  I propose, therefore, to define Duisenberg's behaviour in terms of the Working Definition of Anti-Semitism formulated by EUMC, [although the EUMC has since been succeeded by the European Union Agency for Fundamental Rights (FRA)].   I believe that it is fair to say that Duisenberg's behaviour falls into almost every category of antisemitism in the working definition, but to list all the evidence here would be time and space-consuming.  I shall concentrate therefore on the more florid and blatant examples, and an internet search about Duisenberg will almost certainly provide the reader with even more information.   Among the Working Definition's specific examples of antisemitism are:

Calling for, aiding, or justifying the killing or harming of Jews in the name of a radical ideology or an extremist view of religion.

Duisenberg is a supporter of extremist Islam, and formerly of the PLO and Hamas whose nihilistic antisemitism in evident in its Charter and has been proven by its murderous behaviour again and again.  In 2003 Duisenberg organised and spoke at pro Palestinian rally at which donations were collected for the Al Aqsa funds which supports the families of suicide bombers.  She also did not protest against in the chanting of Hamas supporters around her of "Hamas, Hamas, Jews to the gas!"

Making mendacious, dehumanizing, demonizing, or stereotypical allegations about Jews as such or the power of Jews as collective — such as, especially but not exclusively, the myth about a world Jewish conspiracy or of Jews controlling the media, economy, government or other societal institutions.

After the 2003 rally, Duisenberg draped a PLO flag from the balcony of her home in Amsterdam.  When requested by her Jewish neighbours to take it down, they were told; "It's the rich American Jews who make it possible for Israel to do what they are doing to the Palestinians". More recently, in January 2010, Duisenberg added to this calumny by engaging in the too-ready conflation of Zionism with Judaism, invariably the hallmark of the antisemite who is trying to pass.   See also Duisenberg's answer in an interview in the Dutch magazine Keuzevrijheid :

"… These are the tactics of the Jewish lobby. By calling me an antisemite I will not be able to criticise the Zionist regime…"

This is as blatant an example of the Livingstone Formulation* as was the original by Ken Livingstone himself:

*(The Livingstone Formulation wilfully muddies the distinction between legitimate criticism of Israel on the one hand, and treating Israel as a unique evil on the other and it alleges that a powerful Jewish or Zionist plot or 'lobby' is engaged in a deceitful campaign to illegitimately protect Israel from criticism of things that it does wrong.)

Denying the fact, scope, mechanisms (e.g. gas chambers) or intentionality of the genocide of the Jewish people at the hands of National Socialist Germany and its supporters and accomplices during World War II (the Holocaust). Accusing the Jews as a people, or Israel as a state, of inventing or exaggerating the Holocaust.

See the interview mentioned above. The following is a translation of part of it from the original Dutch.  Duisenberg's accusations of there being a holocaust in Gaza, and her linking it to the Nazi holocaust of Jews as well as references to Israelis as Nazis are in bold below:

"Why do they say you are an anti-semite?

"These are the tactics of the Jewish lobby. By calling me an anti-Semite I will not be able to criticise the Zionist regime. It is not the Jews who are not good, the zionist ideology is not okay. The Jewish lobby is incredibly strong here and in America.

"The total closure of Gaza is against international law, human rights and the conventions of Geneva. But Israel does not give a damn. There are 39 UN resolutions not executed but Israel has a free pass. It is about time that we, the Dutch, get rid of our eternal feelings of guilt about the holocaust. That feeling is forced upon us by the Jewish lobby. We are certainly guilty, and especially the Nazi's, but the Palestinians are not. The Holocaust should never happen again, but essentially another one is taking place over there. There is separation, colonisation, and an apartheid system. We were stupid enough to give an inhabited piece of land to the Jews.

"To the Jews it is the promised land…

"That's not the essence for them. They are the self-styled chosen people.   That's what the Nazis also said about Aryans. The others (not Aryans) had to disappear.

"Which choices do you regret in retrospect?

"I do not have any regrets. But I regret the fact that to this day it follows after me that I had meant the victims of the Second World War when I actually meant that I hoped to collect six million signatures against the Palestinian occupation. I never for a second thought about that.   I meant a multiple of the 600 signatures we had already collected."

(Given Duisenberg's sentiments and behaviour, this is far more likely to have been a Freudian slip than a mere mistake.  She is trying, in vain, to dig herself out of a hole of her own making).

"It was the euphoria. We had just started with "Stop The Occupation".  I gave a lecture and people listened to us. The remark was the result of loose talk, it was too spontaneous. In the beginning I reacted solely out of emotions and concern.  Now I would not use these kind of expressions anymore, now I resort more to international law.  I have to be extremely careful. When I say that Jews in South Amsterdam are annexing restaurants, I will again be engulfed by critics, but it is true. When I enter they leave. But I do not see any wrongdoing by saying that…."

(There we have it.  Duisenberg does not "see any wrongdoing" when she makes antisemitic remarks, which makes a nonsense of the "I meant a multiple of  600″ excuse above.  She does not regret them, rather she "regrets" people's reactions to them).

Accusing Jewish citizens of being more loyal to Israel, or to the alleged priorities of Jews worldwide, than to the interests of their own nations

Duisenberg's obsession with the "Jewish lobby" which she alleges runs Holland and her reference elsewhere to the "rich Jews" of America, evidences this.

Using the symbols and images associated with classic antisemitism (e.g., claims of Jews killing Jesus or blood libel) to characterize Israel or Israelis.

From an interview in IslamOnline during which Duisenberg accuses the Israelis of blood libel and trafficking in human organs:

"… Have you heard about the human organs that Israelis are taking from the Palestinians?

"It is true; I saw the pictures. The Israeli soldiers are taking away young men and five days later, they brought them back cut open.

"Israel has admitted committing such a crime…."

(Note: Even the Goldstone Report found no evidence of this, although the accusation re-emerged in Haiti when Israel was among the first responders to the disaster. That was also later admitted to be false).

Drawing comparisons of contemporary Israeli policy to that of the Nazis

Examples of this can be found above in the Keuzevrijheid interview.

Holding Jews collectively responsible for actions of the state of Israel

In the interview in IslamOnline the notion of collective Jewish responsibility for Israel's actions is inherent both in the question and in Duisenberg's answer:

"(IOL):I wonder why the majority of Europeans, who usually support human rights, support Israel while it is committing serious violations of human rights?

"Mrs. Duisenberg: This is because of two things; first, the Jewish lobby in Holland, like in the United States, is very strong and powerful…. In addition, whenever you have something against the Jewish people in Holland, they call you an anti-semite…"

The foregoing constitutes substantial evidence that Duisenberg is an antisemite within the terms of the EUMC definition; indeed hers is a persistent pattern of behaviour.  Moreover, Duisenberg's overweening arrogance and her own mouth condemns her as Abigail Esman describes :

That being the case, I cannot blame Prof Chesler for her frustration about the Duisenberg's spiteful immaturity and I, too, am appalled by the attempts to stifle debate by too-ready recourse to lawfare by Duisenberg and her ilk.

Were I Duisenberg I would take great care in future to engage what passes for my brain before opening my mouth,  or I should invest in a larger shovel and better equipment if I persisted in digging holes for myself by making antisemitic remarks before witnesses and then trying to insult people's intelligence by denying that I had.