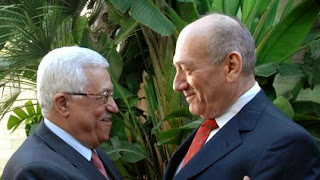 A sketched map of Israeli prime minister Ehud Olmert’s land-for-peace offer to Palestinian Authority President Mahmoud Abbas in 2008 — hurriedly drawn up by Abbas after a meeting with Olmert that December, and made public for the first time on Thursday — suggests that Israel was prepared to withdraw to borders very similar to the pre-1967 lines and swap areas of northern and southern Israel in return for maintaining the larger settlement blocs.

The map, published by Walla news in Hebrew and at TheTower.org in English, was based on an offer Olmert made to Abbas on December 16, 2008, during a meeting in Jerusalem. Olmert presented Abbas with a large formal map showing his territorial compromise proposal for the contours of a Palestinian state as part of a permanent peace accord, and demanded that Abbas initial the proposal before taking it back to Ramallah for consideration by the Palestinians. Abbas refused to do so, but on his return to his headquarters, he gathered his officials and asked them to remain silent while he hastily recreated the offer on a sheet of official Palestinian Authority notepaper.

The sketch, which includes no place names, indicates that Olmert was apparently willing to more or less return to the pre-1967 lines, while maintaining the Gush Etzion settlement bloc south of Jerusalem, the settlement city of Ma’ale Adumin to the east, and a slice of territory that apparently would encompass the large settlement of Ariel in Samaria. In exchange for expanding Israeli sovereignty to those areas, Israel would have given up some of its own land to the new Palestinian state.

According to Walla, Olmert envisaged relinquishing Israeli territory on a one-for-one basis to the Palestinians in areas including near Afula; near Tirat Zvi south of Beit She’an; north of Jerusalem; in the Judean Desert, and in the Lachish area. He also endorsed a tunnel route to link Gaza and the West Bank.

Olmert, as he has subsequently confirmed, was also prepared to divide Jerusalem into Israeli- and Palestinian-controlled neighborhoods, and to relinquish Israeli sovereignty at the Temple Mount and the entire Old City. He proposed that the “Holy Basin” be overseen instead by a five-member, non-sovereign international trusteeship, comprising Israel, the PA, Jordan, the US and Saudi Arabia. 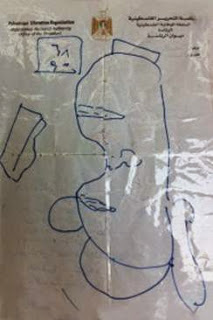 A sketch of the land for peace offer made by former Prime Minister Ehud Olmert to Palestinian Authority President Mahmoud Abbas in December 2008. The map was hand-drawn by Abbas. (photo credit: Walla News)

According to Walla, Olmert has confirmed that Abbas’s sketched map is similar to that depicted in his proposal, and reconfirmed his readiness to have relinquished sovereignty at the Temple Mount.

The map shows no Israeli presence in the Jordan Valley. Walla said Olmert confirmed he was ready to forgo an Israeli presence in the Jordan Valley — a key strategic area, control of which Prime Minister Benjamin Netanyahu has defined as vital to Israel’s security. In return, Walla cited Olmert as saying, Israel expected full security cooperation with Jordan.

In March, the New Republic reported that in September 2008 Abbas was close to signing an agreement that would have seen him give up on the so-called “right of return” for Palestinian refugees and their descendants beyond a symbolic number of several thousand.

Overall in recent years, Olmert has been widely reported to have proposed that Israel annex some 6.3 percent of the West Bank to encompass the key settlements, and compensate the Palestinians with a corresponding 5.8% of territory from within Israel, plus the corridor linking Gaza to the West Bank. The Palestinians have been reported to have countered with a proposal for a far smaller, 1.9% land swap. Abbas told the Washington Post in 2009 that Olmert’s offer was insufficient. “The gaps were wide,” he said.

Some analysts suggest Abbas backed out at the time in large part because he believed that Olmert, who had announced that he planned to resign in order to fight corruption allegations, did not have the political clout to see the deal through. Others see Abbas’s failure to seize the most far-reaching offer even made by an Israeli prime minister as proof that no offer that Israel might reasonably make would be accepted by the Palestinian leadership.

Publication of the map Thursday drew a sharp response from Deputy Minister Ofir Akunis (Likud), a staunch Netanyahu loyalist who acts as a liaison between the government and the Knesset. Akunis said that what he called the PA’s rejection of the Olmert offer shows that the Palestinians are not really interested in peace.

“It is further proof that the argument is not about Judea and Samaria [the West Bank] but on the very existence of Israel,” Akunis told Walla. “Even though Olmert sold out on everything, gave in, for nothing in return, the Palestinians didn’t accept the offer. Their continued refusal of even the most generous offer should present a warning sign to the whole world: The Palestinians are the obstacle to peace.”

Olmert has said that Abbas did not accept the offer but also did not specifically reject it. Rather, according to Olmert, Abbas failed to respond to it.