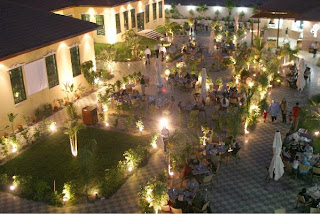 Fancy restaurants and Olympic-size pools: What the media won't report about Gaza

In recent days, the international media, particularly in Europe and the Mideast, has been full of stories about "activist boats sailing to Gaza carrying desperately-needed humanitarian aid and building materials."

The BBC World Service even led its world news broadcasts with this story at one point over the weekend. (The BBC yesterday boasted that its global news audience has now risen to 220 million persons a week, making it by far the biggest news broadcaster in the world.)

Indeed the BBC and other prominent Western media regularly lead their viewers and readers astray with accounts of a non-existent "mass humanitarian catastrophe" in Gaza.

What they won't tell you about are the fancy new restaurants and swimming pools of Gaza, or about the wind surfing competitions on Gaza beaches, or the Strip's crowded shops and markets. Many Palestinians in the West Bank and Gaza live a middle class (and in some cases an upper class) lifestyle that western journalists refuse to report on because it doesn't fit with the simplistic story they were sent to write.

Here, courtesy of the Palestinian Ma'an news agency, is a report on Gaza's new Olympic-sized swimming pool. (Most Israeli towns don't have Olympic-size swimming pools. One wonders how an area that claims to be starved of water and building materials and depends on humanitarian aid builds an Olympic size swimming pool and creates a luxury lifestyle for some while others are forced to live in abject poverty as political pawn refugees?)

If you pop into the Roots Club in Gaza, according to the Lonely Planet guidebook, you can "dine on steak au poivre and chicken cordon bleu".

The restaurant's website in Arabic gives a window into middle class dining and the lifestyle of Hamas officials in Gaza. And here it is in English, for all the journalists, UN types and NGO staff who regularly frequent this and other nice Gaza restaurants (but don't tell their readers about them).

And here is a promotional video of the club restaurant . In case anyone doubts the authenticity of this video, I just called the club in Gaza City and had a nice chat with the manager who proudly confirmed business is booming and many Palestinians and international guests are dining there.

In a piece for The Wall Street Journal last year, I documented the "after effects" of a previous "emergency Gaza boat flotilla," when the arrivals were seen afterwards purchasing souvenirs in well-stocked shops. (You can also scroll down here for more pictures of Gaza's "impoverished" shops.)

But the mainstream liberal international media won't report on any of this. Playing the manipulative game of the BBC is easy: if we had their vast taxpayer funded resources, we too could produce reports about parts of London, Manchester and Glasgow and make it look as though there is a humanitarian catastrophe throughout the UK. We could produce the same effect by selectively filming seedy parts of Paris and Rome and New York and Los Angeles too.

Of course there is poverty in Gaza. There is poverty in parts of Israel too. (When was the last time a foreign journalist based in Israel left the pampered lounge bars and restaurants of the King David and American Colony hotels in Jerusalem and went to check out the slum-like areas of southern Tel Aviv? Or the hard-hit Negev towns of Netivot or Rahat?)

But the way that many prominent Western news media are deliberately misleading global audiences and systematically creating the false impression that people are somehow starving in Gaza, and that it is all Israel's fault, can only serve to increase hatred for the Jewish state – which one suspects was the goal of many of the editors and reporters involved in the first place.

Tom Gross is a former Middle East correspondent for the London Sunday Telegraph and the New York Daily News.