The truth behind the evil Zionist Gaza siege

The progressive fighters for Truth and Justice do not rest in their campaign to legitimize the rule of the unjustly persecuted Hamas. They have stepped up the campaign to expose the evil Zionist siege of Gaza. Lauren Booth, sister-in-law of Tony Blair, interviewed on Iran's Press TV by the progressive friend of humanity, former British MP George Galloway, stated that Gaza is a concentration camp. Press TV, which features holocaust deniers on a regular basis, is an imitation free news outlet that occasionally allows "daring" critiques of the Iranian regime, because it is published only in English. Progressive opposition to Israel is the more usual Press TV fare.

The interview featured this enlightening exchange:

"Why are they keeping you cooped up in the concentration camp called Gaza?" [Galloway] asked her.

"I want to say thank you for using the word concentration camp because the word prison has been applied in the last few years and that's a lie. In a prison you get three meals a day, a nourishing diet, visits from outsiders and some hobbies and rehabilitation and a date for your release," she said. 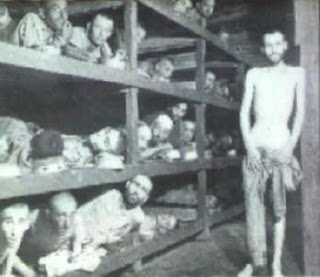 Here, for comparison, is a picture of Lauren Booth, evidently in a Gaza grocery. It is precisely the same, right? No difference at all. 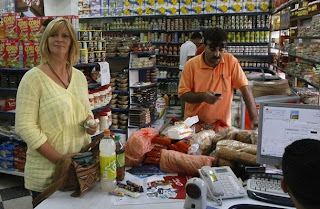 Here are several of the many articles and blog entries that insist that the Gaza strip is just like the Warsaw Ghetto:

Some differences between Gaza and Warsaw Ghetto that occur to me:

Jews in the Warsaw Ghetto did not declare that they wanted to murder all the Germans .
Jews did not fire rockets and mortars into surrounding civilian areas.
Jews did not take power in a bloody coup and murder opponents.
Arabs in Gaza are not being rounded up for transport to death camp.
Most of the Arabs in Gaza are alive and unharmed and evidently well nourished.
Almost every Jew in the Warsaw Ghetto was murdered in a concentration camp, killed in the revolt, starved to death or died of disease.

We also know what a siege means. In Jerusalem, in 1948, the Arabs imposed a siege. There was no practically food other than Hubeiza weed for a while and water was rationed. People really did die of starvation and disease.

Pro-Palestinian propagandists are shameless about their obscene comparisons between the Holocaust and Gaza. Of course, anything filmed from the right angle can be made to look like some photo of Nazi brutality, and anyone can say that anything reminds them of "Nazis" - including a cop subduing a drunk in front of a bar. But the proper comparison for the suffering of Gaza is the equally real and terrible suffering of the German population in World War II, who were deprived of essentials by the blockade imposed by the British navy. It was "collective punishment." How could it be the fault of baby Fritz in Hamburg, who had to go without butter, that Fritz senior, his father, was out in a Waffen SS tank unit in Stalingrad? Unfair! Collective punishment! But that is what war is all about.

Original content is Copyright by the author 2008. Posted at ZioNation-Zionism and Israel Web Log, http://www.zionism-israel.com/log/archives/00000604.html where your intelligent and constructive comments are welcome. Disributed by ZNN list. Subscribe by sending a message to ZNN-subscribe@yahoogroups.com. Please forward by e-mail with this notice, cite this article and link to it. Other uses by permission only.