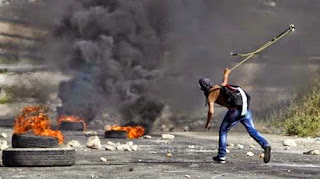 A first person account from Avi Issacharoff at Times of Israel:

BEITUNIA, West Bank — I found myself seconds away from being beaten to death by a mob of Palestinian masked men during clashes in the West Bank town of Beitunia, north of Jerusalem, on Friday.

I’m not prone to exaggeration. It was a case of life and death, and I was within moments of falling victim to the kind of lynch that saw two Israeli soldiers who strayed into Ramallah in 2000 beaten to death by a baying mob.

I was saved by pure good fortune: Two plainclothes members of the Palestinian Authority security forces happened to be nearby and waded in to extricate me. I was already being hit and kicked from behind when they rescued me.

I’ve been covering the Palestinian territories for many years, and been in no shortage of sticky situations, but this came out of the blue. It was totally unexpected.

I was there to report on the Nakba Day protests with a cameraman colleague from Walla News. He was some distance from me when he was approached by several Palestinian journalists who told him to “Get out.”

I walked toward them, and told them that if they had a problem, they should be talking to me. One of the Palestinian journalists, a young woman, then called over to a group of masked men, who swiftly surrounded me and began attacking me.

Only the fact that those two PA security personnel happened to be there saved me. They extricated me and my colleague, and got us to safety. I dread to think what would have happened if they hadn’t been there.

Think about that. A Palestinian journalist works so closely with "a group of masked men" that she can just beckon them to beat an Israeli to death whenever she wants to.

Any chance that the PA security forces have taken any action against her? Sorry, just a Friday afternoon joke.