Moderate Arab gets expelled from his union for Auschwitz trip

In March, I posted "An Israeli leftist's lonely search for a moderate Palestinian Arab." Professor Einat Wilf spent months trying to find a single Palestinian Arab who would agree to sign this statement:

"The Jewish people around the world and Palestinian people around the world are both indigenous to the Land of Israel/Palestine and therefore have an equal and legitimate right to settle and live anywhere in the Land of Israel/Palestine, but given the desire of both peoples to a sovereign state that would reflect their unique culture and history, we believe in sharing the land between a Jewish state, Israel, and an Arab state, Palestine, that would allow them each to enjoy dignity and sovereignty in their own national home. Neither Israel nor Palestine should be exclusively for the Jewish and Palestinian people respectively and both should accommodate minorities of the other people."

In the end, she found exactly one. That person was Mohammed S. Dajani Daoudi, the head of American Studies at Al-Quds University (ironic enough given the hatred of Israel by the American Studies Association) and founder of the Palestinian centrist movement, Wasatia.

If all Palestinian Arab leaders could sign a statement like this today - a very even-handed statement that places a false equivalency between the age-old Jewish attachment to Eretz Yisrael and the recent nationalism of Palestinian Arabs - then there would be peace, real peace, tomorrow.

But only one person has been found to do it publicly.

Now, Dajani's membership in his teachers' union has been suspended because of his trip.

From the Facebook page of Rima Najjar, Assistant Professor of English Literature at Al Quds: 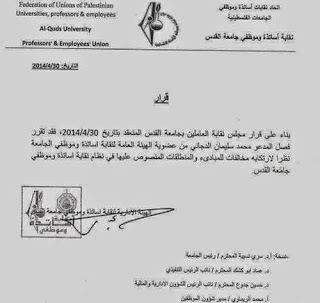 DR. MOHAMMAD DAJANI'S UNION MEMBERSHIP AT AL-QUDS UNIVERSITY HAS BEEN SUSPENDED BECAUSE OF HIS VISIT TO AUSCHWITZ

The attached text is a letter published on the Facebook page of Al-Quds University Union of Professors and Employees, in which it is announced that Dr. Mohammad Dajani's membership in the association has been suspended because of "behavior that contravenes the policies and norms" of the association (meaning the academic and cultural boycott of Israeli universities that the association had voted on). The letter does not state this, but the discussion prior to the announcement refers to the trip he took with some students to visit Auschwitz.

She also quotes another prominent Arab academic, Mazin Qumsiyeh, as saying that Dajanis' visit to Auschwitz is antisemitic!

[Dajani] adopted the Zionist perspective that Judaism and Zionism are the same thing and in our opinion this is an antisemitic attitude to equate Zionism and Judaism and somehow link making peace and Zionism with the issues of Jewish suffering around the world.

The fact is that at least 99% of intellectual Palestinian Arabs cannot stomach the idea that Jews have ever been victims of any sort. They viciously attack the extraordinarily few Palestinian Arabs who truly want to live in peace and coexistence.

If anyone can seriously believe that true peace is possible in such a toxic and hateful environment when a simple admission that Jews were slaughtered is controversial and insulted, I'd love to see their logic.