Hamas' logo for its 25th anniversary shows its priorities

Hamas is planning a huge celebration this coming Saturday for the 25th anniversary of its founding.

Here is their official logo:

A celebration of indiscriminate attacks against civilians! Yay!

But clueless Western "experts" will continue to claim that Hamas really supports a peaceful, two-state solution.

PA refuses to pay for toddler's bone marrow transplant. Guess who did? 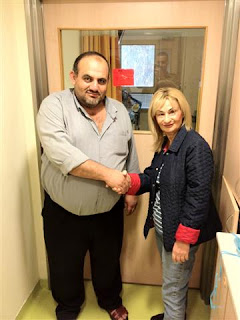 A two-year old Palestinian boy from the West Bank underwent a bone marrow transplant three weeks ago. The procedure, which was done at the Tel Hashomer hospital, was funded by the Civil Administration after the Palestinian Authority refused the family`s request to fund the procedure.

Besides undergoing the transplant, the child is under the care of a social worker who has been attending to the child and family's needs throughout the duration of the hospital stay. “My position entails taking responsibility over Palestinian patients from the minute they are admitted until they are released from the hospital, while coordinating with the Civil Administration and Dalia Bessa,” said Baloum Raid, a social worker who coordinates the hospitalization of all Palestinian patients at Tel Hashomer.

The PA apparently believes that the $130 million it pays every year to terrorists in Israeli prison, and to the families of dead terrorists, is more important than to pay to save their own children's lives.

COGAT is part of the IDF.

Which means that the Israeli army puts a higher priority on saving Palestinian Arab lives than the PA does.
Gepost door Brassé-Limburg pm maandag, december 10, 2012