Palestine Today reports that Hamas and the PA have reached a "partial agreement" to the fuel crisis in Gaza.

According to a senior political source in Gaza, power plant fuel and will enter Gaza through the Kerem Shalom crossing.

He said that the price of liter of industrial fuel to be supplied on a daily basis to Gaza would be 3.3 shekels (or 3.71 shekels), excluding tax.

If this is true, it means that the PA will heavily subsidize the cost of fuel to Gaza to a price similar to the price of smuggled Egyptian fuel, which is itself subsidized by Egypt for the use of Egyptians.

Assuming that the heavy-duty diesel is priced roughly similar petrol used in cars, the PA is agreeing to subsidize 60% of the cost, as Israeli fuel is now about 8 shekels a liter. (That includes high Israeli taxes, though - h/t Shtrudel)

This means that Hamas' blackmail has worked, and it has managed to use the threat of suffering Gazans to avoid paying market rates on fuel - and allowing Hamas to tax the cheap fuel for its own profit. And Western powers will now be paying for Hamas to be enriched by this political blackmail through PA subsidies.

According to this poorly translated and unsourced article, unemployed Gazans are waiting for hours at gas pumps to buy fuel at 3.75 shekels a liter in order to resell it for 5.2 shekels on the black market, earning about 350 shekels a day.

Palestine Times reports that Ismail Haniyeh, Hamas prime minister, holds the "Zionist occupation" to be "fully responsible" for the deaths of 3 Gaza children who died in a tragic fire when fuel their parents were storing in their house exploded, probably from a candle. Haniyeh said that Israel was at fault for its "siege of Gaza and preventing fuel for electricity," which is of course a complete lie: Israel is willing to provide all the fuel necessary, but Hamas is refusing to accept fuel from Israel.

Speaking to Gulf News, Fawzi Barhoum, Hamas spokesman, said that the failure to deliver fuel to Gaza and the power shortage has paralysed life there.

"The death of the three children is a crime and Israel is responsible for it."

"The victims' family and Gaza will not forgive Israel for this crime," he said.

Barhoum said that Israel and some groups in the Palestinian National Authority (PNA) were also responsible for causing a delay in delivering fuel to Gaza Strip.

"Egypt is required to act and come to the rescue," he said.

He called on Arab countries to immediately intervene to save the Gaza Strip from an environmental and humanitarian disaster that Hamas has deliberately caused.

Hamas is cynically promoting Gazan suffering in order to extort money and aid from Arab states. And still none of the leaders of those states are willing to publicly respond that they'll only help when Hamas acts like they care about their own people. The fear of Islamists taking Hamas' side seems to be enough to cause them to keep any of their reservations about Hamas' manipulations to themselves.

Meanwhile, Gazans are waiting in lines from morning to night to get a gallon of petrol. 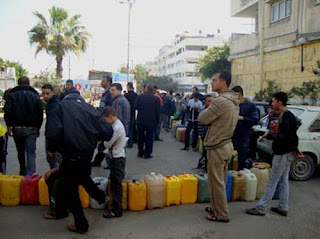