Pimi Agro has figured out a natural way to extend the shelf life of produce by 1,500%, and prevent disease and fungus, too 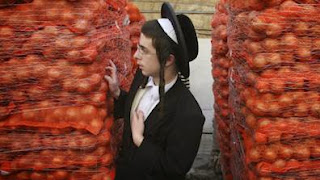 A haredi youth stands next to piles of potatoes in Jerusalem (Photo credit: Matanya Tausig/Flash90)

Between a third and half of the food grown today never makes it to market. Produce of all kinds is “lost” to spoilage and disease, due mostly to transportation, storage, and other logistics issues. As a result, hundreds of millions of people still go hungry – but they don’t have to, thanks to an invention by Israel’s Pimi Agro. By applying a formula based on hydrogen peroxide — “with a few key additions,” said Nimrod Ben-Yehuda, CTO and co-founder of Pimi – fruits and vegetables remain fresh and viable for up to 10 weeks, significantly cutting losses due to rot and deterioration during the transportation process.

Technology like this, he believes, could make a major dent in world hunger. In the coming months, Pimi plans to introduce these inventions to the United Nations and other international institutions. “For places like India, China, and Africa, this is huge, especially because the transportation systems in those areas are slow and refrigeration is hard to come by,” said Ben-Yehuda. “You could walk from one end of India to the other over a period of 10 weeks, and the vegetables and fruit you carry will still be fresh for the entire time.”

It sounds like a fantastic claim, but one Pimi can prove through the extensive scientific studies the company has undertaken over the past decade – studies that were persuasive enough for agricultural and food authorities around the world, including in the US, UK, Germany, Australia, China, and many other countries, to approve Pimi’s all-natural, zero-chemical method of preserving produce.

They’ve also been persuasive enough for no less than Wal-Mart and SunPacific – one the largest retailer in America, and the other the largest shipper of citrus fruit there – to conduct large-scale field tests of Pimi’s technology, with an eye towards licensing it for everyday use, said Ben-Yehuda. “We’ve been speaking to Wal-Mart about how to market produce treated with our products. They’re not necessarily organic, but they are much healthier than ordinary produce – besides having a much longer shelf life – because farmers can cut down significantly on the use of fungicides.”

Fungicides haven’t been on the radar of consumers as much as pesticides, and while organic produce marketers emphasize their use of non-chemical, environment-friendly pesticides – many based on natural ingredients known to deter bugs in specific crops – they usually don’t mention fungicides, which are applied to produce both pre- and post-harvest to prevent fungi from invading produce.

There’s a reason for that silence — most commercial fungicides, it turns out – even those certified as “organic” — are based on copper in the form of copper sulphate spray, and on chlorine. But fungicides are essential to the produce business. With much of the world’s produce shipped by truck and train – without refrigeration, in many places – fruit and vegetables are likely to succumb to rot and fungus that thrive in the hot storage conditions.

According to the Environmental Protection Agency in the US, those fungicides are safe for human consumption in limited doses. Copper is an essential element in the human body, and chlorine is used to disinfect water for human consumption – but why use them, asks Ben-Yehuda, if there is a better, more natural and organic solution? “Our formulation kills a wide range of diseases without any of those additives,” he said. “Listeria, which has been a culprit in many cases of recent food poisoning at American fast food restaurants, is killed within 60 seconds of applying our products. As a result, farmers and wholesalers can cut down on their use of fungicides.”

Pimi Agro’s secret: Its products are formulations based on 99.4% Stabilized Hydrogen Peroxide (STHP), which decomposes into oxygen and water, leaving no chemical residue. There are specific formulations for citrus, stone fruits like peaches and plums, potatoes, and onions and sweet potatoes. The trick, said Ben Yehuda, was getting that other 0.6% of the formulation right – and that took him, along with researchers at the Technion and at Hebrew University 15 years. Pimi’s technology has half a dozen worldwide patents and has been tested under rigorous conditions in the US and Europe over 150 times.

It’s the active ingredients in the additives – all natural and environmentally friendly, said Ben Yehuda – that makes the difference. “Applying just hydrogen peroxide to produce would actually promote rot. It’s our enhanced formulation that turns water and oxygen into products that can greatly extend produce shelf life.” In tests, Pimi’s solutions were found to be 15 times more effective than other preservation and diseaseprevention systems, with 50% more citrus and onions available for marketing after seven months in storage, without the harmful chemical residue left by the preservation systems currently in use – which are anyway less effective than Pimi’s system. The additives, categorized as edible acids, have been declared safe and organic by a host of international agencies, including the EPA and EU food safety agencies.

Besides cutting down on chemical residue and preventing disease, the Pimi solution allows farmers to use much more sustainable growing methods. By extending the life of produce, fruits and vegetables can be transported in more environmentally friendly ways – trains, for example, instead of trucks that contribute to traffic tie-ups and increase air pollution. Since there’s less loss, farmers can grow less, avoiding overplanting, and especially cutting down on the use of fertilizers (another major pollution problem), and using less irrigation water, said Ben-Yehuda.

Besides Wal-Mart and SunPacific, Pimi has begun working with other large food producers, including Pepsico, FritoLay, BASF, and others. Several products are already on the market, and customers are using Pimi products in Israel, the US, Germany, the UK, Canada, Japan, and Russia. The company plans to develop products for additional produce, including asparagus, mushrooms, and peppers, and it’s developing formulations for meat, poultry, and fish.

Although Pimi’s business prospects appear great, it’s not just about profit for Ben-Yehuda. “We see this technology as something that can really help to alleviate world hunger, and we plan to submit a report to the UN, the World Bank, and other international groups, showing how wide-scale deployment of our methods could help feed many more people,” he said. “The world – especially the developing world – loses half of what it grows to rot and disease. More produce means more food to feed hungry people, and our methods don’t require the deployment of dangerous chemicals or expensive and questionable geneticreformulations of fruits and vegetables. With our products, we believe there will be enough to go around to make a real dent in world hunger.”