The real reason food prices in Israel are high 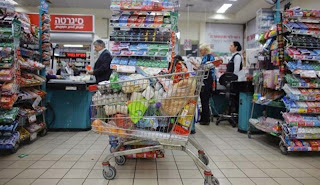 When Israelis protested earlier this month against the higher cost of Israeli puddings here than in Berlin, Finance Minister Yair Lapid responded with real, generous empathy, saying he was angry too.

“Israelis ask why it is cheaper in Berlin,” Lapid said. Referring to the proposed 2015 state budget, which has been accepted by the cabinet but still requires Knesset approval, he said: “If they look at the present budget, they will see there are more and more products under [price] controls. We will continue to put more products [under price controls] without asking the manufacturers.”

Lapid’s empathy is quite touching, but before the finance minister proposes price controls on food as the ultimate solution for the high cost of living in Israel, he ought to take the time to read the testimony of someone who spent a decade and a half setting those price controls.

Dori was testifying in a trial against bread manufacturers accused of being part of a cartel in violation of the Restrictive Trade Practices Law during a period that includes the time when Dori was in charge of price controls. The companies are accused of coordinating the discounts they gave the major supermarket chains for price-controlled basic brown bread and of cooperating on several large tenders.

It is not very often that you hear a prominent regulator testify under oath that their regulation is not actually worth much. What the Antitrust Authority is arguing, and what Dori confirms, is that the appointed regulators are not really regulating, and don’t know what the companies being regulated are really doing.

To determine the price of standard brown bread — and the process is roughly the same for almost all other price-controlled food products — the Economy Ministry (formerly the Industry, Trade and Labor Ministry) need only check three production costs: the price of energy, of flour and of labor, Dori said in court. Significant changes in any of those three categories will lead to a change in the bread price.

Once every few years — Dori did not say exactly how often — does the price supervisor bother to collect the financial reports of the regulated companies and read the profitability reports released by the bread manufacturers, which the supervisor accepts at face value.

Only very rarely — and Dori admitted it never happened with bread prices — does the supervisor take issue with the figures in the companies’ financial reports or insist that costs be allocated differently. The way the costs are allocated is critical, since the manufacturers have a clear financial interest in allocating as much of their costs as possible to the few price-controlled goods they produce, in an effort to show the companies are losing money on those goods and that the government should raise the price.

‘Are you crazy? They’ll take the price controls away’

The trial made it clear that the bread manufacturers collaborated on selling their price-controlled bread to supermarkets for about half the maximum amount allowed by the government, a discount that was not passed on to consumers. Dori knew this, but instead of concluding that the real cost of producing the bread was relatively low and that the government-set price was too high, she accepted the manufacturers’ claim that the they were losing money on making the bread — and that therefore the government should raise the price consumers must pay.

Wiretaps recording meetings where the bread manufacturers coordinated the supermarket discounts show that their biggest worry was not the reputed high cost of producing price-controlled bread but that the bread would no longer be price-controlled.

“Are you crazy? They’ll take the price controls away from us,” one executive said on a recording made by the Antitrust Authority.

“It’s true,” Dori confirmed in her court testimony. “In my opinion, the bakeries seem to fear that if there are no [price] controls, the chains will not accept a higher price. In other words, the regulation helps them, the bakeries, to raise the price. Therefore I very much support removing the supervision, which can only increase the competition.”

“Berman really begged that before approving the removal of controls we approve a price increase,” Dori said in court, referring to one of Israel’s largest bread manufacturers. “If he had known that he could have increased the price without regulation, he would not have asked for it. This is more proof that the regulation is quite convenient for him, since it allows him to raise prices. He feared that after we remove the regulation there will be competition, and he will have a hard time.”

Any way you slice it

The fact that the companies being regulated want the price controls because it makes it easier for them to charge more demonstrates the absurdity of thinking that Lapid’s plan for more price controls would actually lower the cost of living. What the bread trial shows is that price controls destroy competition and raise prices.

The problem is that politicians tend to ignore the facts. Dori testified that various industry and trade ministers over the years, including Ran Cohen and Dalia Itzik, have taken part in the price control game. While Itzik insisted on keeping the price stable for unsliced bread, she agreed to raise the price for sliced bread, resulting in a difference of about 1.50 shekels.

Dori does not hide the fact that this was a political decision by the minister, detached from any economic or professional consideration, and said professional staff in the ministry objected to it. “The decision did not stem from cost differentials,” she said. “It was because of the interest in leaving the standard bread cheap, so people from the weaker classes could buy it.”

Any way you slice it, the result is that bread manufacturers have made a lot of money on their price-controlled sliced bread. “Despite all our claims, the standard sliced bread is the main bread that helps the bakeries preserve their profitability,” one of the bakery executives was recorded as saying. Dori’s embarrassing testimony has prompted the government to take action. Bread prices are being examined in-depth in an effort to evaluate the true production cost. The government has also decided to overhaul the way food prices are regulated, a change that was included in the draft version of next year’s Economic Arrangements Law, in which the state would stop taking into consideration the discounts given to retail chains.

For the first time, the government is also examining the retailers’ profit margins, and appears to have realized how ridiculous it is to maintain price controls in places where there is a real possibility of competition. There are five large bread manufacturers that produce the basic brown bread that the government regulates; if the government were to step back, they would be forced to compete with one another.

This is also the main conclusion that Dori reached: In the end, price control is a bad way to lower food prices, far inferior to promoting competition. Based on what Lapid has said, however, it doesn’t sound like the politicians have absorbed the message.