Where does Hamas get the money for the tunnels and weapons? From you!

Here's a partial answer: from you.

I just updated a chart I did a couple of years ago: (Source of figures) 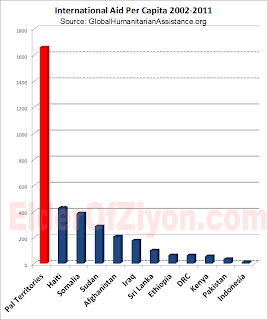 There are the top recipients of international aid, sorted by aid per capita.

The PA spends over half its budget on Gaza - even when they are not controlling Gaza. Which means that Hamas has money to buy weapons and build tunnels instead of helping Gazans and building infrastructure.

As we've seen, UNRWA projects and other international projects that were allowed to import cement recently are run by corrupt people who will ensure that some of the dual-use material ends up in Hamas' hands. But the tunnels were clearly being built when Israel allowed cement to be imported, as well as when Egypt did.

So, yes, our tax dollars - which pay the Palestinians more per capita than any country every single year - went a long way towards helping build the terror infrastructure Israel faces today.