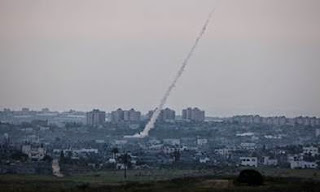 On Thursday, the Jerusalem Post said a number of foreign journalists have received death threats from pro-Hamas Twitter users after reporting Hamas' use of human shields.

"Hamas rockets just launched over our hotel from a site about two hundred metres away. So a missile launch site is basically next door,” tweeted Peter Stefanovic of Australia’s Channel Nine News. In response, a Twitter account called @ThisIsGaza accused Stefanovic of “passing and fabricating information to Israel... from GAZA.” The account also threatened to sue the reporter for providing information.

"You are a cretin," added Twitter user @longitude0. "Are you working for the IDF?” the Twitter account asked, telling Stefanovic that “in WWII spies got shot.”

Financial Times Jerusalem Bureau Chief John Reed was also threatened after he issued a tweet saying that he saw “two rockets fired toward Israel from near al-Shifa hospital, even as more bombing victims were brought in.” The Post explained that Shifa is "the main medical facility in the Strip."

“You have to wonder w the shelling how patients at Shifa hospital feel as Hamas uses it as a safe place to see interviews," tweeted Wall Street Journal reporter Nick Casey. The tweet included a picture of a Hamas official using the hospital for media interviews. The tweet was deleted, but, the Post said, pro-Palestinian Twitter accounts continue to list him as someone that "must be sued for crimes."

Harry Fear, a UK journalist reporting for RT, was also accused by pro-Palestinian Twitter users of informing Israel about sites he said "are well-known among locals and internationals here."

“Should a journalist only report the noise and ferocity of Israel’s attacks & not the sounds of Gaza’s rockets? Both terrify people,” he tweeted.

According to the pro-Palestinian media outlets, yes. Since the current conflict began, many media outlets like MSNBC have provided biased reporting, accusing Israel of being overly aggressive, while portraying Hamas as the innocent victims. CNN, for example, was accused of doing Hamas' bidding by reporting on children being killed in the conflict with no mention of the schools being used by Hamas as military bases.

A post at The Right Scoop observed that CNN did not play video showing Hamas telling citizens to ignore evacuation notices from Israeli forces. Moreover, CNN suggested that only children in Gaza are being traumatized by the conflict without mentioning that children in Israel are also being traumatized by repeated rocket attacks. Worse yet, many media outlets like CNN do not tell their audiences that Hamas' charter calls for genocide and the elimination of Israel.

"This is exactly the kind of one-sided propaganda that Hamas wants the international world to see," The Right Scoop said. Now we learn -- to no one's surprise -- that anyone trying to tell the truth about the situation on the ground faces death threats.