The IDF believes it has killed over 1,000 Hamas fighters

From tunnels to R-160s, a primer on Hamas and its deadly capabilities

The full story of the subterranean passages, thousands of foot soldiers, and large supplies of rockets and bombs, that turned Hamas into a sophisticated enemy 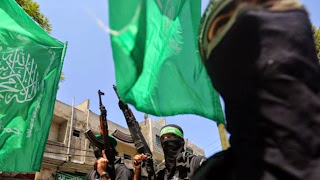 Masked Palestinian members of the Ezz Al-Din Al Qassam brigade, the military wing of Hamas, parade during the funeral of Ahmed Ayad, 22, in the Shajaiyeh neighborhood of Gaza City on Saturday, June 21, 2014 photo credit: AP/Hatem Moussa)

Since its establishment in 1987 as the Palestinian offshoot of the Muslim Brotherhood, with the goal of establishing an Islamic state to replace Israel, Hamas has significantly grown in political and military power, but especially since wresting control of the Gaza Strip in June 2007 from the Palestinian Authority.

In the interim period between Operation Pillar of Defense in late 2012 — the previous military operation in Gaza, aimed at eliminating the threat of rockets launched into Israel — and the current Operation Protective Edge, Hamas has focused on its capacity building, procuring and manufacturing long-range missiles and investing millions in the construction of tunnels into Israel to enable the kidnapping of soldiers and civilians.

Here are answers to some basic questions regarding Hamas’s capabilities, as revealed throughout Operation Protective Edge which began on July 8.

How many fighters does Hamas have?

Hamas entered the operation with an estimated 15,000 active fighters, including men in supportive positions. Although other Israeli sources speak of hundreds of Hamas fighters killed, the IDF believes it has killed over 1,000 (which would underline Israeli claims that there is a far higher proportion of combatants than widely reported among the 1,360 total Gaza fatalities cited by Gazan health sources). The IDF is destroying or significantly harming Hamas’s combat units in Beit Hanoun and Shejaiya in the northern Gaza Strip and Khan Younis in the south.

What weapons are they using against the IDF?

Very little face-to-face fighting is taking place in Gaza. Mimicking the tactics used by Hezbollah in Lebanon, Hamas heavily relies on two types of weaponry: anti-tank missiles and improvised explosive devices (IEDs). The anti-tank weapon of choice is the Russian shoulder-launched RPG-29, and is used against infantry troops and armored vehicles. This was the weapon used by Hamas fighters who infiltrated Israel and attacked an IDF post near Kibbutz Nahal Oz on Monday, killing five soldiers. It was also used against an army jeep near Kibbutz Ein Hashlosha on July 19, killing two soldiers.

Inside Gaza, Hamas has booby-trapped hundreds of homes and installations with improvised bombs. One such IED killed three Israeli soldiers on Wednesday in a building labeled as an UNRWA clinic in the southern Gaza Strip city of Khan Younis, where IDF soldiers were searching for a tunnel shaft. IDF’s Gaza Division commander, Brig. Gen. Micky Edelstein, told journalists that in one Khan Younis street he encountered, 19 of the 28 homes were booby-trapped, ready to explode over IDF soldiers who enter them.

The IDF says it was surprised by the extent of booby-trapping across the Gaza Strip.

Where did all these weapons come from?

Most of Hamas’s weapons were smuggled in from Egypt via tunnels running underground from the Sinai Peninsula. Since Operation Pillar of Defense in 2012, the Israeli Shin Bet security service has reported, Hamas has invested much energy in developing smuggling networks in Sinai and importing weapons from Libya, Sudan and Iran. In March, the IDF intercepted the Klos-C, an arms ship originating in Iran and headed for Sudan, its cargo intended for Gaza. The ship was carrying several dozen advanced Syrian M-302 missiles with a range of up to 200 kilometers (125 miles) and a payload of up to 170 kilograms (375 pounds).

But when Egypt began to significantly crack down on arms smuggling in Sinai beginning in late 2012, Hamas’s arms importing was significantly hampered.

Where are Hamas fighters trained?

Hamas’s foot soldiers are mostly trained locally in camps within the Gaza Strip, but specialist fighters have also been trained abroad.

One Hamas militant arrested by the IDF in Khan Younis on July 20 told his interrogators he had undergone paragliding training in Malaysia in 2010 together with 10 other Hamas members, with the goal of infiltrating Israel and carrying out a terror attack. Malaysia denied the claim.

In 2002, the Shin Bet arrested 20-year-old Hamas operative Muntasir Faraj in Gaza, who had undergone advances explosives training in Sudan and Jordan. Faraj, Israel’s military prosecution told the court, was meant to return to Gaza as an expert and train local operatives.

Additional training camps are known to exist in Syria and Iran.

How did Hamas build the terror tunnels?

For a year and a half, Israel has been closely following the most recent terror industry to emerge in the Gaza Strip: tunnel digging into Israel. The IDF’s decision two weeks ago to launch a ground operation in Gaza stemmed from the need to destroy 31 known tunnels and prevent the possibility of cross-border kidnapping, like that of corporal Gilad Shalit in June 2006.

The digging of tunnels began four years ago and has demanded 40 percent of Hamas’s budget, The Times of Israel has learned.

Tunnel diggers have been using electric or pneumatic jackhammers, advancing 4-5 meters a day. The tunnels found, we are told, are mostly dug 18-25 meters (60-82 feet) underground, though one was discovered at a depth of 35 meters (115 feet). “That’s like a 10-story building underground,” one expert said.

Digging requires engineering and geological expertise, with tunnels usually dug through sandy soil, their roof supported by a more durable level of clay. As they are dug, the tunnels are reinforced by concrete panels, manufactured locally in workshops adjacent to each tunnel. These workshops have also been targeted by the IDF throughout the operation.

While Israel knows of 31 tunnels — a third of them with shafts inside Israeli territory — it does not rule out the possibility that a few more exist. One Hamas operative arrested during the operation disclosed information on a previously unknown tunnel.

How does Hamas obtain its rockets?

Hamas has two types of rockets: those smuggled in from abroad (mostly from Iran), and those manufactured locally.

As cross-border smuggling diminished thanks to joint Israeli and Egyptian military efforts, Hamas was left with a limited supply of Iranian Fajr-5 missiles with an 80-kilometer range. It began manufacturing medium-range missiles locally based on Iranian know-how in small workshops using smuggled metal. Hamas produced the M-75, a rocket with a 75-kilometer range named after Hamas military commander Ibrahim Maqadmeh, killed by Israel in 2003. Nine such missiles were fired into Israel during Operation Pillar of Defense in 2012.

During Operation Protective Edge, Israelis discovered that Hamas had succeeded in increasing its rocket range with the R-160, a rocket with a 160-kilometer range capable of reaching Haifa, and the J-80, with a 80-kilometer range. Hamas’s armed wing Izz ad-Din Al-Qassam reports on its website having fired 9 R-160s and 19 J-80s. Islamic Jihad reports having fired two missiles with a 100-kilometer (62 mile) range and 38 missiles with a range of 70 kilometers.

Israel claims it has substantially diminished Hamas and Islamic Jihad’s manufacturing and launching capabilities in the current operation, conducting 1,500 strikes against missile sites. Having been on the receiving end of over 2,800 rockets since the start of the operation, Israel believes that Gaza’s armed factions have fired over a third of their missiles, but still have a few dozen long range projectiles.

How else has Hamas tried to attack Israel?

In addition to the rockets and tunnels, Hamas has also tried to stage attacks from the sea, including one using a five-member commando force, which landed at Zikim beach, south of Ashkelon, and was killed in an IDF airstrike.

It has also tried to mimic Israeli military capabilities by launching drones into Israel both for intelligence-gathering purposes and for attack. One such unmanned aircraft was shot down near Ashdod on July 14. While Hamas claimed it was able to gather information on sensitive Israeli sites in previous drone operations, showing footage ostensibly gathered by the aircraft, Israel denies the movement has managed to do that.

How aware was the IDF of Hamas’s capabilities?

Here, the picture is complex. The IDF claims intimate knowledge of Hamas’s tunnel digging drive, but has admitted that the total number of tunnels leading into Israel is yet unknown. The army has discovered new shafts as it entered homes and investigated captured Hamas operatives in Gaza.

With regards to the organization’s missile capability, the IDF has provided accurate intelligence, but the information obtained was far from exhaustive. The fact that rocket launchers can easily be hidden underground or masked by vegetation in the backyard of a home has made the detection and destruction of medium- and long-range launchers prior to entering Gaza particularly difficult.

Mitch Ginsburg contributed to this article.

Read more: From tunnels to R-160s, a primer on Hamas and its deadly capabilities | The Times of Israel http://www.timesofisrael.com/from-tunnels-to-r-160s-a-primer-on-hamas-and-its-deadly-capabilities/#ixzz399rMGfBc
Follow us: @timesofisrael on Twitter | timesofisrael on Facebook