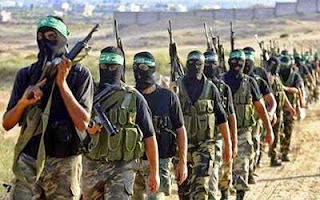 Israel's Shin Bet discovered the existence of a Hamas air commando unit. In 2010, ten Hamas commandos were sent to Malaysia to participate in paragliding training, with the end goal being to use it to carry out terror attacks on Israel.

This information came to light during the investigation of a Hamas fighter arrested by the IDF a few days ago and investigated by the Shin Bet. According to the Shin Bet, overnight on July 20th, the IDF arrested a Hamas military man apparently in charge of a terror cell in the area of Karara in Kahn Yunis in the Gaza Strip.

During the man's investigation, his involvement in the paragliding training came to light as well as the intention of Hamas to use this training to kidnap Israeli soldiers. In addition, the suspect revealed preparatory plans for an anti-tank ambush and revealed a sniper position on the tenth floor of the Palestinian Red Crescent building in Kahn Yunis.

I wonder that the International Committee of the Red Cross thinks about that?

The paraglider story seems incomplete to me; I don't see how a paraglider can help kidnap soldiers...although it could distract soldiers while a second group comes out of tunnels. The story ends with

The final detail that came to light during the investigation as that Hamas was striving to carry out a "quality" terror attack that would be singular in nature and important, hence the plan to use paragliders.

There was another interesting detail:

In the middle of June 2014, he went through refresher course that included training on other weapons, among them rifles, Kalashnikovs, m-16 PKCs, RPGs, and the use of explosive material. He also learned different methods for kidnapping soldiers and how to stay in tunnels for long periods of time. The suspect was set to finish the course by the end of Ramadan at the end of July 2014.

The timing of a refresher course seems to lend credence to the story, now disputed, that there was a plan for a major attack around Rosh Hashanah.

I don't know about the timing but clearly the huge number of tunnels weren't built just for a single kidnapping.