The Palestinian Center for Human Rights reported on July 19:

The Al Mezan Center for Human Rights likewise reported that 13-year old Ibrahim Nasser was killed on that day.

Here is the shahid poster of "13-year old"  Ibrahim Nasser, killed on that same day in that same place, by the Abu Rish Battalions of the Al Aqsa Martyrs' Brigades: 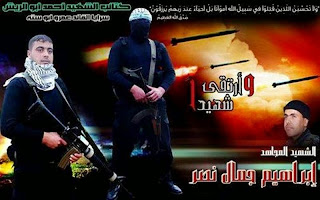 This is proof that despite the claims of the UN, of PCHR and of the Al Mezan Center, they do not investigate the actual deaths the way they pretend to - they often just take the Hamas data and republish it without checking.

And the UN reports this data as fact - and so does the rest of the world.

Hamas is telling reporters and NGOs that dead terrorists are children, both to hide the number of terrorists killed and to inflate the number of children killed. The ever-compliant Gaza NGOs are knowingly going along with the scam - if they had so much as visited the hospital and viewed the body they would have instantly known that Ibrahim was not 13. They simply repeated Hamas' lies to the world.

In other words, the NGOs that are trusted by the international community are as corrupt as the Hamas itself.

The Abu Rish Brigades made a similar poster about one other of their members killed in the same attack, Mohammed Slahiya (probably the 22-year old listed above): 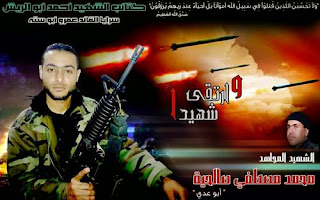 Slahiya's 15-year old brother, Wassim, was killed in the same attack. Of course, the same "investigators" reported him as a civilian - after all, he was only 15!

But the Abu Rish Brigades published a martyr poster of their members killed - and guess who is on the upper right corner?

Yes, that is Wassim - 15 year old Fatah terrorist, but a "civilian" according to PCHR and Al Mezan. (Ibrahim Nasr is on the top left. The Terrorism Info center verified that Wassim was indeed 15.)

(Update): All nine people on this poster are Abu Rish Brigade terrorists, and all nine were counted as a "civilian" in the PCHR report above - including three "children."

Here is another case where terrorists are reported as civilian.

Wassim indeed is a child, but so-called "human rights" organizations are not going to say a word of condemnation for terror groups recruiting children. (!5 year olds are too young to be fighters according to international conventions.)

PCHR and Al Mezan are not human rights organizations - they are propagandists. The UN, by relying on these liars as their source for casualty figures, is complicit in these lies. And the many journalists who mindlessly parrot the UN figures should realize that their information sources are suspect.

These are hardly the first confirmed terrorists to be identified as "civilian" by these organizations. And we've already shown that B'Tselem's methods to determine the status of the dead is incredibly naive and inaccurate as well.

What will it take for the world to wake up and realize that political organizations with an agenda cannot be trusted to produce accurate information?