The terrorist in the "righteous gentile" family house

This story was on the front page of the New York Times and has been reported all over. The irony of a person who saved Jews during the Holocaust now accusing Israel of war crimes is too rich to ignore:

In 1943, Henk Zanoli took a dangerous train trip, slipping past Nazi guards and checkpoints to smuggle a Jewish boy from Amsterdam to the Dutch village of Eemnes. There, the Zanoli family, already under suspicion for resisting the Nazi occupation, hid the boy in their home for two years. The boy would be the only member of his family to survive the Holocaust.

Seventy-one years later, on July 20, an Israeli airstrike flattened a house in the Gaza Strip, killing six of Mr. Zanoli’s relatives by marriage. His grandniece, a Dutch diplomat, is married to a Palestinian economist, Ismail Ziadah, who lost three brothers, a sister-in-law, a nephew and his father’s first wife in the attack.

On Thursday, Mr. Zanoli, 91, whose father died in a Nazi camp, went to the Israeli Embassy in The Hague and returned a medal he received honoring him as one of the Righteous Among the Nations — non-Jews honored by Israel for saving Jews during the Holocaust. In an anguished letter to the Israeli ambassador to the Netherlands, he described the terrible price his family had paid for opposing Nazi tyranny.

...Dr. Zeyada (older brother) said last month that none of his family members were militants. Israel says that it takes precautions to avoid killing civilians, and that Hamas purposely increases civilian casualties by operating in residential neighborhoods. It has offered no information on whether the Zeyada family home was hit purposely, and if so, what the target was and whether it justified a strike that killed six civilians. The military told the left-leaning Israeli newspaper Haaretz, which first reported Mr. Zanoli’s decision, only that it was investigating “all irregular incidents.”

Once can understand why the IDF is unwilling to discuss details that could reveal its intelligence assets during a war. But there is information that is freely available out there - information that the media like the NYT hasn't bothered to check - that indicates that there was a valid military target in that house.

Here is the list of people killed in the July 20th attack, from PCHR:

At approximately 14:00, an Israeli warplane launched a missile at a 3-storey house belonging to Jameel Sha’ban Ziada, in which 20 people live, in al-Boreij refugee camp. The house was destroyed and 6 members of the family, including 2 women and a child, and a guest were killed: Jameel Sha’ban Ziada, 53; Yousef Sh’aban Ziada, 43; ‘Omar Sha’ban Ziada, 32; Sha’ban Jameel Ziada, 12; Muftiya Mohammed Ziada, 70; Bayan ‘Abdul Latif Ziada, 39; and Mohammed Mahmoud al-Maqadma, 30.

Hmmm...one of those names is a bit different.

What do we know about Mohammed Mahmoud al-Maqadma?

Well, you can ask B'Tselem. When they list the people killed in the house, they laconically mention that Maqadama was a "military branch operative." 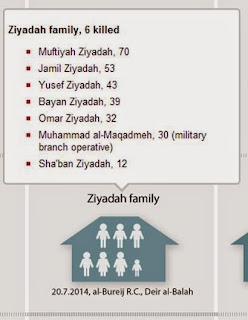 He was a member of Hamas' Al Qassam Brigades.

Haaretz  reported that he was a "militant" ...but only in Hebrew. 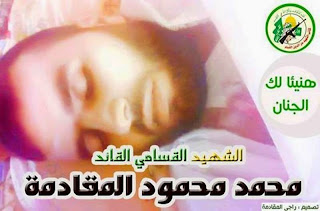 I don't know if Maqadameh was the target, or if his presence there indicated that this house was on top of a weapons cache or a bunker. I don't know if the family was purposefully protecting their "guest" or if they were being used as human shields. My guess is that during battles, Hamas members were going to their command and control centers and not hiding among families, which would indicate that either the Ziyada house was a valid military target or it was on top of one.

The point is - this information is available. The New York Times first discussed the bombing of that same house on August 4, and by then the identity of the "guest" was known to NGOs. The anomalous name among the victims is a point that a decent reporter should have checked out.

The same research that people can do on the Internet is available - along with much more  - to the staffs of major media outlets like the NYT.

Yet the media report, without skepticism, every claim that there were no military targets in each flattened home. The information that contradicts this claim is out there - if they would bother to look for it.

They would rather believe that Israel is indiscriminately bombing civilians than take the extra hour or two to do some basic research - the type of research that the public relies on the media to do to begin with.

I don't know what really happened at the Ziyada home. But there is enough information to indicate that this is not the open-and-shut case that the media is characterizing it as. Their refusal to go the extra mile - their willingness to accept Palestinian Arab lies without question and to assume Israeli maliciousness without question - is indeed a clear bias, especially since in the past the IDF has managed to explain details of the circumstances months later  - explanations that have never been debunked.

There was a terrorist at the Ziyada house. A decent reporter would ask, why?

A biased reporter would cover it up.