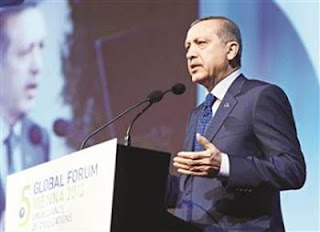 Islamophobia must be recognized as a crime against humanity in the same fashion that Zionism, anti-Semitism and fascism should be, Prime Minister Recep Tayyip Erdoğan said yesterday.

Speaking at the “Fifth Alliance of Civilizations Forum” in Vienna’s Hofburg Palace, the prime minister underlined the rising trend of fascism across the Europe. “We are facing a world in which racist attacks have gained momentum, terrorism has claimed more lives, and religions and sects treat each other with less understanding,” Erdoğan said.

“Just like Zionism, anti-Semitism and fascism, it becomes unavoidable that Islamophobia must be regarded as a crime against humanity,” Erdoğan said.

UN Watch slammed the comparison at the UN-sponsored conference, and notes the irony that Erdogan's statement itself is anti-semitic:

"We remind secretary-general Ban Ki-moon that his predecessor Kofi Annan recognized that the UN’s 1975 Zionism-is-racism resolution was an expression of anti-Semitism, and he welcomed its repeal." [UN Watch said.]

UN Watch urged all members of the Alliance’s High Level Group, including Archbishop Desmond Tutu, “to denounce remarks that fundamentally contradict the very purpose of a forum supposedly dedicated to mutual tolerance.”

“Erdogan’s misuse of this global podium to incite hatred, and his resort to Ahmandinejad-style pronouncements appealing to the lowest common denominator in the Muslim world, will only strengthen the belief that his government is hewing to a confrontational stance, and fundamentally unwilling to end its four-year-old feud with Israel.”

Erdogan is saying that Jewish national self-determination is a "crime against humanity," which is by any yardstick an anti-semitic statement.

Will NATO or the UN condemn this vile expression of hate given at a UN-sponsored conference?

Recent Turkish pressure on France and Germany regarding accession to the European Union heighten the need to question Turkey’s strategic intentions and political identity. Is Turkey a moderate, pro-Western democracy? Or is it run by Islamists embracing policies and regimes hostile to the West?

Turkey wants to be treated as a member of the West, calls itself “European,” and expects EU membership alongside its NATO credentials. But Turkey has dissented on key policy issues like Iran sanctions, antagonized the only Middle East country with Western values (Israel), and – until the Arab Spring ruined relations with Syria – courted many regimes dangerously opposed to the West.

The Syrian war has undermined Turkey’s “no-problems-with-neighbors” strategy and exposed its bluster. In August 2011, Turkey threatened military action against Syria but only if other nations joined it. In June 2012, Syria shot down a Turkish warplane over the Mediterranean. The Turkish response: consultations with NATO followed by much sound and fury. So when Israeli warplanes allegedly attacked Syrian military targets earlier this month, one would have expected Turkey to praise tiny Israel for taking risks to address a regional threat that the much bigger Turkey has found too daunting to confront alone. Instead, according to the Turkish daily  Hurriyet, Turkey’s foreign minister Ahmet Davutoglu urged Syria to attack Israel, suggested that Assad’s inaction was due to “a secret agreement” with Israel, and vowed that Turkey would not sit still in the face of an Israeli attack on any Muslim country. Sometimes truth is stranger than fiction.

Not to be outdone by his foreign minister, Turkish Prime Minister Recep Tayyip Erdogan called the Israeli airstrike in Syria “state terrorism.” Does Erdogan call the countless Turkish airstrikes into Iraq “state terrorism?” What about airstrikes by the international force that Turkey would presumably join if the West ever mustered the courage to intervene in Syria? Any sane observer must wonder if Erdogan and Davutoglu know how absurdly inconsistent they sound or if they actually believe their own propagandist drivel.

A sober look at Turkey’s past and present reveals a darker side that the EU is trying to overlook – presumably for the economic benefits of Turkish EU membership and the hope that such membership will reform Turkey. The past: the Ottoman Turks slaughtered approximately 1-1.5 million people in the Armenian Genocide almost a century ago. Rather than apologize and make reparations à la Germany, Turkey has whitewashed history and used Article 301 of the Turkish Penal Code prohibiting “insulting Turkishness” to silence those brave enough to speak out about the issue – like journalist Hrant Dink (who was assassinated in 2007 for doing just that).

Indeed, today’s Turkish democracy falls short of EU standards. According to the New York-based Committee to Protect Journalists, Turkey is the “the world’s leading jailer” of reporters. Dissidents are jailed under vague anti-terror laws, and human rights organizations have documented many other abuses (often relating to the Kurdish conflict), including extrajudicial killings, “disappearances,” torture, and restrictions on free speech.

Turkey’s war with the Kurdistan Worker’s Party (PKK) completely discredits Turkish denunciations of Israeli conduct towards Palestinian terrorist organizations. According to figures released by the Turkish military and reported in the Hurriet, from 1984 to 2008, the conflict has killed about 32,000 PKK members. That 24-year total dwarfs the number of Palestinians killed in Israel’s 65-year struggle with terrorism. Thus, when Erdogan debased the Davos World Economic Forum to score cheap populist points by excoriating President Shimon Peres for Israel’s 2009 war on the Gazan terrorists attacking Israeli civilians, he obviously forgot his own country’s record.

Erdogan’s constant condemnation of Israel’s presence in the West Bank would suggest that Turkey profoundly respects the territorial integrity of its neighbors. Yet Turkey has illegally occupied Cyprus since 1974 – an occupation recognized by no country, compelled by no significant security concerns, and, according to the European Commission of Human Rights, rife with human rights abuses.

Turkey has also tried to block Israeli participation in NATO exercises, even though NATO benefits substantially from IDF expertise (so much that NATO may have finally secured Israel’s 2013 participation in exchange for granting Turkey’s request for Patriot missile defense systems).

And Turkey recently resumed the trial in absentia of former Israeli military commanders for the 2010 events on the Mavi Marmara. If Turkey’s sailors boarded an Israeli ship carrying supplies for Kurds and violating a Turkish naval blockade, and the Israeli passengers lethally attacked those sailors, how would the Turks have reacted? Rather than acknowledge both sides of the story in that unfortunate incident, Turkey has used it to deepen its diplomatic rift with Israel.

The irony is that – until Erdogan’s premiership – Israel and Turkey were extremely close allies. That Erdogan ruined the relationship is hardly surprising: as mayor of Istanbul in June 1997, he said, “The Jews have begun to crush the Muslims of Palestine, in the name of Zionism… Today, the image of the Jews is no different from that of the Nazis.” Birikim, a Turkish socialist culture magazine, reported this quote by Erdogan, which no Western newspaper covered.

The unfortunate reality may be that Turkey can pivot back towards the West only after the Islamists currently running the country are replaced by more moderate secularists (like Turkey’s pre-Erdogan leaders). Until then, the EU should continue to ask about Turkey’s troubling past and present.

Noah Beck is the author of The Last Israelis, a naval thriller about the Iranian nuclear threat and current geopolitical issues in the Middle East.