Autopsy report: No evidence Jaradat was victim of violence 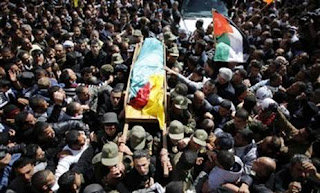 Palestinians carry body of Arafat Jaradat during his funeral in the village of Se'eer, Feb 25, 2013 Photo: Ammar Awad/Reuters

The intermediate autopsy report on Arafat Jaradat, the Palestinian inmate who was found dead in his Megiddo Prison cell last week, said there was "no evidence" of poisoning or any evidence of physical violence against the 30-year-old gas station employee.

According to the report, the fractures in the ribs and hemorrhages on the skin were typical of the condition in people who undergo intensive resuscitation in an attempt to save their lives. The resuscitation was performed for 50 minutes by prison physicians and Magen David Adom paramedics.

The ministry concluded that the forensic institute will continue to conduct tests to identify the cause of Jaradat’s death.

In addition to the Health Ministry's investigation, the police were investigating the death and a judge has ordered an inquest, as is the case in all instances of prison deaths.

Palestinian Authority President Mahmoud Abbas called for an international inquiry into Jaradat's death, saying Jaradat was "assassinated" and accusing the Shin Bet of torturing the Palestinian detainee during interrogation.

Israeli officials dismissed the Palestinian Authority's demand for an international inquiry as a “predictable” maneuver and part of a larger strategy to bring the international community into the conflict whenever possible.

On Monday, Public Security Minister Yitzhak Aharonovitch said that Israel would be happy to have an international professional look at how it was investigating the incident. The officials also noted that UN Undersecretary- General for Political Affairs Jeffrey Feltman called for an “independent and transparent” investigation, but said nothing about an international inquiry.

Jaradat's death sparked violent protests in the West Bank. Two soldiers and 11 Palestinians were injured in riots that started after Jaradat's funeral.