Do you support a cause drowning in innuendo? Share facts online when lies are reported erroneously? Take action via Twitter, Facebook or in person to evoke a brighter future? Many would argue activism to improve the lives of others is hard-wired into our human condition, built-in to our DNA. Hearing about hunger, deprivation, or other human rights violations is hard to stomach. But what if activism is used as a cover for sinister purposes? What if people hijack language reserved for human rights activists and apply it to efforts to eradicate a nation-state?

Take the situation in Gaza for example. When you first hear about groups banding together to provide humanitarian aid to Gazans it appears altruistic. What right-minded person would vie to see Gazans supposedly starve, deny their necessary means of survival or hamper their progress as a people? Yet, what if the campaign to aid Gazans was marred by an undertow of deceit? What if the "Freedom Flotilla 2", which is actually the 10th effort to break Israel's counter-terrorism blockade, is the product of a group of organizers whose sole goal is to further delegitimize Israel and ultimately eliminate the Jewish State? What if these organizers have a hidden agenda to strengthen Hamas's political objectives and make it difficult for Israel (and Egypt) to deter arms smuggling and terrorists from flooding the Gaza Strip?  In short, what if these organizers were all connected to Hamas in a web of lies? Meet the key organizations and people involved in Freedom Flotilla 2: 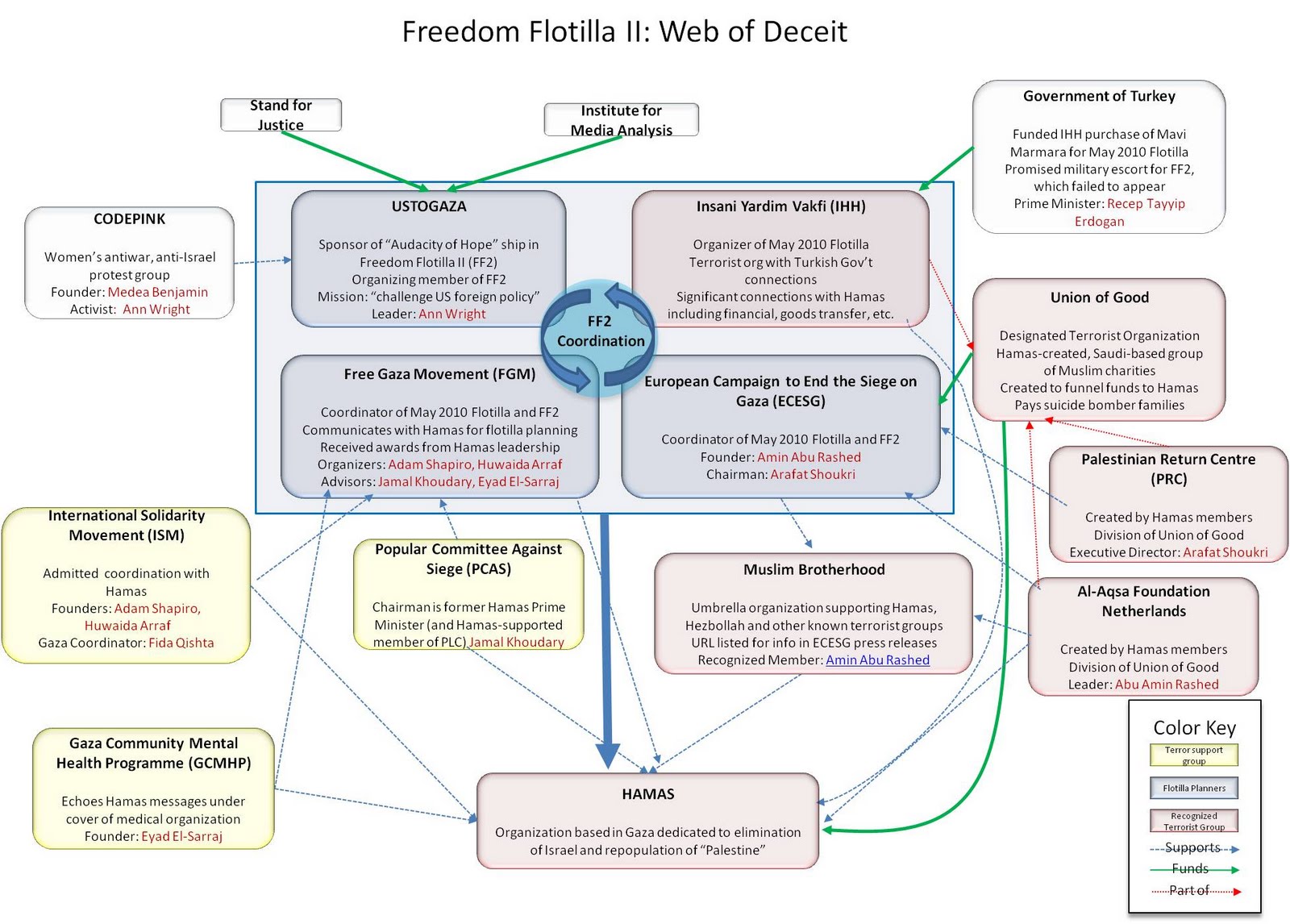 (Enlarge by clicking on the image twice)

Websites of the groups involved in Freedom Flotilla 2 claim they have a humanitarian interest in aiding Gazans. Take the ECESG (European Campaign to End the Siege on Gaza) for example. Once you type this acronym or its full name into your browser, you land on a site with a headline that reads:

"Working Towards the Dignity and Freedom for the Palestinians in Gaza."

The ECESG works towards a future in which the inviolable human rights of the Palestinian people are realized within the framework of international law and human rights conventions.

Here's the catch. The rhetoric simply hijacks existing human rights language. It makes no mention of the terrorist group Hamas who is a proxy of Iran, and has had a stranglehold on the Gaza Strip and the Palestinians who live there since 2007. It does not mention the fact that Hamas threw Fatah members from rooftops during Hamas' bloody seizure of Gaza the same year.

The ECESG is an umbrella body of non-governmental organizations across Europe that advocates the fundamental right of the Palestinian people in Gaza to live in peace and dignity without being subjected to any form of collective punishment such as the cutting of supplies of food, fuel and medicine or their denial of free access to travel outside Gaza Strip. The ECESG supports the restoration of the inalienable rights of the Palestinian people in Gaza and lobbies for pressure to be exerted on the Occupying Power to lift its siege and end the human tragedy there.

It urges the participation of politicians and non-politicians alike to honor their duty to stop the suffering of one and a half million people trapped in Gaza under the most inhumane conditions. Supported by international and humanitarian law, the ECESG encourages all peoples of conscience and human rights advocates to intensify their efforts to highlight this life-threatening issue and end the catastrophe.

This one is a colossal lie. ECESG's site misleads and misinforms visitors as it makes no mention of the fact that Hamas has stolen thousands of tons of aid from Palestinians, and left them in the dark after turning off their electricity – just so that Hamas could release staged pictures of Palestinians sitting in candlelit rooms, in order to blame Israel. It makes no mention of the gross human rights violations Hamas has conducted in the Gaza Strip. These heinous crimes include violating the Geneva Convention at every turn. Hamas has refused Red Cross visits to kidnapped soldier Gilad Shalit during his five-plus years in captivity as well as the ability for him to communicate with his family via mail. In fact, Hamas has not shown any signs of life of Gilad in years, only an eagerness to swap him (or, sadly, perhaps his body) for a 1000 terrorists in Israeli prisons.

So who is the ECESG?

Simply put, ECESG is an anti-Israel, pro-Hamas umbrella organization that organized the Freedom Flotilla 2, supported the Mavi Marmara flotilla, and is involved in other projects to further delegitimize and isolate Israel.

The ECESG founder, Amin Abu Rashed (aka Amin Abu Ibrahim) is one of the key organizers of Freedom Flotilla 2. A daily Dutch newspaper, De Telegraaf, recently named Rashed as the "brain behind the flotilla" and main backer. He is a Palestinian born in Lebanon who holds a Dutch passport and subscribes to the radical ideology of the Muslim Brotherhood. Rashed's past affiliations include the Dutch branch of the Al-Aqsa Foundation, and the Union of Good. Israel outlawed Al-Aqsa in 1997, and declared it a terrorist organization in 1998. The US followed and designated Al-Aqsa as a terrorist group in May of 2003, and then designated the Union of Good in 2008.

Rashed's resume gets even more pockmarked as he was implicated in the prosecution of the Holy Land Foundation, which the US Treasury cited as a Specially Designated National and the European Union (EU) banned it for its financial material support to Hamas. For those keeping score, this adds up to Rashed having connections to three organizations that exist to support Hamas's terrorist agenda.

Greek authorities have blocked all Gaza-bound ships in Freedom Flotilla 2, and deserve special thanks. The U.S. ship called the "Audacity of Hope" was blocked along with the Tahrir. The Tahrir was full of activists but had no humanitarian aid onboard. It's not surprising to hear the "activists" on the "Audacity of Hope" rejected Greece's offer to ferry their purportedly humanitarian aid to the Gaza Strip. The "activists" responded to their recent detention byholding a hunger strike outside the US Embassy in Athens demanding the US government allow them to sail to Gaza.

The creativity of these "activists" is for the most part mind-boggling yet endless. On July 4, 2011, 700 "activists" said they would land at Ben-Gurion airport and declare their destination: Palestine. As of this writing, 120 "air flotilla" activists landed in Ben Gurion, 38 were deported to Europe and 82 are awaiting deportation. When will this Flotilla-o-rama end? Wouldn't it be easier to acknowledge Israel as a Jewish State, and apply this energy at the negotiating table?

Could the Palestinians — perhaps not just Hamas, but elements of Fatah — have a big hand in masquerading terrorism as activism? Chief Palestinian Negotiator Saeb Erakat said volumes when he admitted on the same day the flotilla was not a humanitarian mission by stating that funneling food, cement and other goods via other means, such as Greek ships, missed the point, which was to "immediately lift, not ease" Israel's maritime blockade of Gaza.

So if the "free Gaza" rhetoric along with the flotillas isn't a "humanitarian mission," what is it? Could this be the turning point where governments around the world realize the difference between activists and terrorists? At the very least, the world should be able to discern that such a vast discrepancy exists.

Jennifer Hanin is an Act For Israel founder & executive editor, and author of Becoming Jewish.